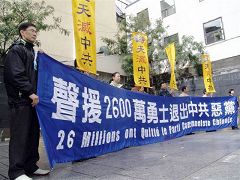 A rally held on September 15, 2007, in Montreal, Canada to support the 26 million courageous people who have withdrawn from the Communist Party and its affiliated organizations.

Ms. Mao once called a man in northern China. When she mentioned The Nine Commentaries, the man immediately gave her a name he wanted to use to quit the Party, as if he was waiting for this moment. During another phone call to a bookstore in Beijing, Ms. Mao told the person on the other side that she was calling from abroad. He listened to her explain about the wave of withdrawals from the Communist Party and said, "I received the Nine Commentaries in my email, and I know what is happening." He quickly agreed to quit the Party. Officials at a provincial Security Bureau in southern China quietly listened to information of quitting the Party and said they were aware of a lot of things.

Zhang Fu in southern China wrote in his announcement, "After I read the Nine Commentaries on the Communist Party, I truly understood the Party's evil nature, and I realized the Communist movement has brought tremendous disaster upon the Chinese people." A middle-aged man named Zhe Yu in Qinghai Province wrote, "I live in a corrupt environment, and I couldn't help but witness and participate in many things that go against my conscience. After I read the Nine Commentaries on the Communist Party, my mind was awakened by the ongoing historic change." Tian Gui and several others in northern China wrote, "We have benefited tremendously from reading the Nine Commentaries since it not only helped us see through the Party's wickedness, but also pointed out a bright path for the Chinese people."

Police repent by staying away from the source of evil

Recently, an increasing number of police officers have expressed frustration at being used as tools and scapegoats by the Communist Party to persecute innocent people. Several of them publicly announced their withdrawal from the Party after they learned the truth about the persecution.

One police officer felt deep regret about having committed crimes against Falun Gong practitioners. After quitting the Party, he now posts flyers about the persecution in the streets to make up for his mistakes.

He said, "I did not sleep a wink last night. I wrote 'Truth, Compassion, Tolerance' and 'Falun Dafa is good' on paper and posted them on both sides of the street. I did it until 4:00 a.m. this morning, and I posted about 200 of them. My friend also wants to do it!"

Another officer who quit the Party said he was assigned to the police department after graduating from college, and he followed his superiors' orders in arresting Falun Gong practitioners. Now that he has learned the truth he will no longer follow the Party in doing harmful things. He said he would treat Falun Gong practitioners kindly from now on.

Another officer told a volunteer at the Global Service Center for Quitting the Chinese Communist Party (CCP) that all of the adults and children in his family have quit the Party, "Yes, my children have all quit the Party; in fact, all of us have quit. Our children will not be sacrificed to the wolf."

Jia Li, a veteran Party member in Guizhou City said he knew from decades of painful experience that a person of conscience should no longer live under the Party's unscrupulous tyranny. He solemnly announced his withdrawal, in an effort to purify his soul and to completely sever his relationships with the Party.

Recently, many active and former members of the military and armed police have quit the Party, showing a growing trend of group withdrawals. Several military men and women posted a message on the Future China Forum to announce their withdrawal from the Party, and they swore to no longer serve as the Party's killing machine. More than 10,000 clicks and replies were made to the post, most of them written by fellow servicemen.

Qinghua, a veteran said, "I joined the Party as a young man while serving in the military, with lofty aspirations. I witnessed the Party opening fire on civilians and students on June 4, 1989 (the Tiananmen Square Massacre). The bloodshed shocked and infuriated me. The Party is now corrupt to the core, and I have stopped believing in it. The Party's persecution of Falun Gong practitioners, followers of Truth-Compassion-Tolerance, and especially its harvesting of organs from living humans, exposes its exceeding cruelty."

Ming Yang, a former soldier said he dislikes the widespread practice of bribery in the military. His friend was sent to brutally suppress people who the Party called "violent rioters." In fact they were unarmed citizens appealing after suffering grave injustice. The soldiers were reluctant but dared not disobey orders. He knew many students were killed during the 1989 Tiananmen Square Massacre, but he was still shocked to hear that Falun Gong practitioners' organs are being harvested while they are still alive! He said, "The Party always sings the most pleasant tune while committing the most evil deeds. Yet, this level of atrocity still exceeds people's psychological limit. Those without conscience will receive justice from the heavens." He announced his withdrawal from the Party.

A veteran soldier who fought in the Sino-Vietnam War was issued a Second Class Merit Award, but he said with a heavy heart, "I was a company commander. Only 36 soldiers in my company survived, and I cannot express my feelings in words. Each dead soldier's family was given only 600 Yuan [about US $75]! We were furious at the Party's disdain for our loyalty and sacrifice. I read the Nine Commentaries, and many parts of the book spoke to my heart, therefore I have decided to quit the Party and all of its organizations."

A man in Mainland China said to a volunteer at the Global Service Center for Quitting the CCP, "The gap between the rich and the poor is huge under the Party's rule. People living on the bottom have exhausted their patience. I will not only quit the Party myself but also help my family and friends quit the Party. I will help other Chinese people quit the Party until the Party completely collapses."

He said he broke through the Party's information blockade and learned about many of the Party's atrocities, especially the Party's harvesting of Falun Gong practitioners' organs. He said the Party will be condemned, and he will expose the Party's crimes everywhere.

"I will oppose the Party and support Falun Gong. Falun Gong is slandered, framed and [its teaching] twisted. I hate this persecution, so I'll help [expose it]. I'll post messages in Internet cafes and through chat programs; I'll send it to everyone. I'll print large posters and put them up in the streets at 2:00 a.m."

He acknowledged the risks involved in doing such work, including the possibility of arrest and imprisonment; however, he added, "More people will step forward and speak out against the Party for the sake of China's future and the long-lasting prosperity of the Chinese people."

The heavens are bringing the Communist Party to justice

Hong Wei, a Heilongjiang Province government official said, "As an official, I know very well the Party's wicked ways and I also have suffered a great deal from illnesses. I heard the facts about the persecution of Falun Gong, and I truly loathe the corruption and stupidity of the Party. I want to withdraw from all of the Party's organizations, as I shall not accompany the Party on its way to hell."

One person who quit the Party using his real name told the volunteer at the service center, "The Nine Commentaries are excellent! This book revealed the Party's killing history. Chinese intellectuals have been left with little choice under the Party's ruthless iron fist; now it's time to awaken!"

He said he had learned about the Human Rights Torch Relay, which will pass through more than 100 cities in more than 30 countries on five continents. He said this activity is significant, because the Chinese people have never truly enjoyed human rights--a luxury for the masses as the Party allows privileges only for its lackeys. It's important to let the entire world know about the human rights violations in China so they can judge for themselves. He hopes the Torch Relay can enlighten the world, to confront China's human rights issues.

You Dong from Heilongjiang Province said, "I'm not a Falun Gong practitioner, neither have I tried to study the principles of Falun Gong. However, I deeply sympathize with Falun Gong practitioners. I'm also nauseated and furious at the Party's cruelty, hypocrisy and its contempt for human life. In fact, I quit the Party several years ago, and I want to announce my withdrawal from the wicked Party again on the Epoch Times website."

A military commander witnessed the Party's massacre of defenseless students and civilians in the Tiananmen Square Massacre. He could never free himself from a guilty feeling. He said although the Party has always operated in a black box to cover up its crimes, there are still conscionable military officials who would reveal some facts, which allowed him a deeper understanding of the Party; he is therefore even more disgusted with the Party.

He said he could listen to the Sound of Hope radio and had read some reports on the Internet. He thought the reports on live organ harvesting was truthful and objective, as he had seen death row inmates being carved up within one minute after execution, and a crowd gathered and looked on from 10 feet away. It has become a common occurrence in China and is no longer news.

Three people, Cao Renyi, Jin Shuibin and Pu Yongzhe, left China and were shocked when they read The Nine Commentaries for the first time. They had never heard of the book in China and thus kept the book with them. The book opened their eyes, and they learned for the first time that the Party has killed more than 80 million Chinese people over the past five decades, ran over students with tanks during the 1989 Massacre, and harvested living Falun Gong practitioners' organs since the year 2000, and sold the organs for huge profit. They said, "Where is the Party taking the country and the Chinese people? Only into a catastrophe! I have decided to completely break away from this evil Party and free myself. I do not want to be destroyed along with the Party when the heavens decide it's time. I want to ensure my own safety!"

The Nine Commentaries on the Communist Party has been translated into 32 languages and is being read in 35 countries. More and more people are awakening as The Nine Commentaries reach an ever-expanding audience. Indignation toward the Communist Party and empathy for the suppressed Chinese people forged a historic trend--the complete disintegration of the Party. More than 26 million people have quit the Party, and the number increases by 30,000 to 40,000 each day.

Note: Chinese language recordings of some of the above can be found by clicking on the link to the Chinese version of this article below.

“Ms. Wang Lanxiang and Mr. Chen Genghui Passed Away Due to Persecution”