After the Chinese Communist Party's (CCP) crimes of removing organs from living Falun Gong practitioners and cremating their bodies to destroy the evidence were exposed, people have taken action. The Falun Dafa Association and Minghui/Clearwisdom websites launched the "Coalition to Investigate the Persecution of Falun Gong" (CIPFG) on April 4, 2006 and began collecting evidence from many sources. The following are some recently obtained leads. We hope kindhearted insiders will continue to help us expose the truth about the labor camps, prisons and hospitals and officials in Mainland China who collude with each other to brutally persecute Falun Gong practitioners, so we can together bring an end to this persecution.

Transplant experts say that Huazhong Scientific and Technical University is responsible for allotting organs from "brain dead" people in China. Nothing could be learned as to how the brain dead people are identified nor about the distribution method of the organs. Apparently, no clear directions have been given.

The professional said that the heart to be transplanted must be a living heart. Time is of the essence. Kidney and liver transplants are easier, as they can be stored for longer than a heart. Therefore, the possibility of harvesting a heart from a live person is greater than for a kidney or liver transplant.

The above information tells us that the new administrative rules and regulations are likely a cover up for continued live organ transplants. If the number of hospitals where organ harvesting is carried out is limited, tighter restrictions and control can be maintained. If the new rules/regulations can truly be carried out, the CCP should also adhere to the Constitution, return freedom of belief to people and stop persecuting Falun Gong.

We are not fully clear from what we have heard that heart transplants continue to be performed in great numbers at Zhongshan Hospital," but we are clear that the Chinese Communist Party is committing crimes under its so-called "policy of protection."

Insiders revealed that during 2003 and 2004, the Air Force Hospital on Dongfeng Road in Guangzhou City of Guangdong Province, and the "Kidney Donor Hospital" near the "Legal Medical Hospital" on Guanyu Road in Kunming City of Yunnan Province often received organs (mainly kidneys) from unidentified donors. Between five to ten (kidneys) were brought to the "Air Force Hospital" on average every two to three days, and between ten and twenty (kidneys) were taken to the "Kidney Donor Hospital" approximately every two to three days.

The rumor is that all kidneys came from Falun Gong practitioners. No one could think of any other source, given the large amount of kidneys available.

Zhengzhou No. 7 Hospital Waiting Time for Kidney Transplants is One Month

In 2007, a friend of mine and I inquired at Zhengzhou No. 7 Hospital of Henan Province as to how long it takes to get kidneys for a kidney transplant. We were told, "One month." I asked about the cost and was told, "100,000 yuan."

On the morning of August 10, 2007, I visited a relative at Chengdu Air Force Tumor Hospital in Sichuan Province. There was an elderly lady waiting for somebody at the entrance. I walked up to her and chatted with her.

I asked, "Are you caring for a patient in the hospital?"

She responded, "No, I live here. My daughter is the anesthetist. I do odd jobs in the hospital."

I asked, "You look healthy. I heard this hospital could transplant kidneys!"

She responded, "Yes, that building over there is for kidney transplants."

I told her that since ancient times, Chinese people would not have anything removed from the corpse of a family member. I asked who was willing to sell their relatives' organs, or donate them? I also told her that it has been exposed that the CCP harvests organs from live Falun Gong practitioners for profit.

The lady said, "Ah, I remember now." One day I went home after work and saw a flyer at my door. It talked about organ harvesting from live Falun Gong practitioners. She said, "I now remember since you mentioned it. Last year, this hospital performed 8 kidney transplants in one day, and 15 to 16 kidney transplants in a two-day period. I was very busy doing odd jobs."

I asked, "Is it because the prison had many death penalty criminals. It probably does not have now that many. Am I right?"

She said, "There are still death row criminals. There are still many patients waiting for kidneys in the hospital. An over 60 year-old man received a kidney from a fourteen to fifteen year old youth. But it had to be removed again after several days. It was not suitable!" I thought to myself, a fourteen or fifteen year-old life was destroyed like that.

I then talked with a security guard. I mentioned that one of my relatives needs a kidney. I asked if there were many kidneys available? He said: "Who is willing to donate organs? They are all forcibly removed. If you see many police enforcing martial law and standing guard, the prison is bringing in prisoners. They are all forcibly brought here. The family members are not told about this. Many people are waiting for organs in the hospital."

The No. 3 Surgeon University Xinqiao Hospital Surgical Division is the kidney disease center for the entire army. It performs a large number of organ transplants. It probably is the largest such center in China. 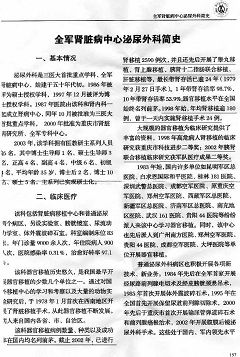