On September 9, 2007, a traditional festival in memory of the "River Child " was held in South Hiroshima, Japan. At the event, local Falun Gong practitioners performed the traditional Chinese dance "Flower Fairies" and the five Falun Gong exercises, which greatly impressed the people of Hiroshima. 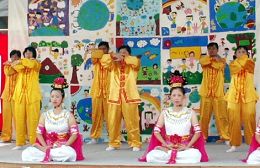 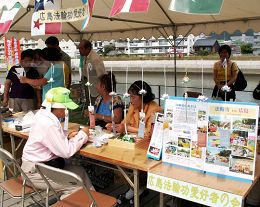 The celebration was held on the green banks of a river. Besides the two main stages, the River Child Stage and the Peace Stage, there was also a free market and many food stalls, selling a great variety of traditional foods made by overseas students from many countries. The local residents enjoyed the colorful performances while tasting and buying delicious food. The majority of dances were performed on the Peace Stage, but there were also traditional dances from countries such as Japan, Chin,a and India.

“Prophesy on the CCP's Evil and Catastrophic Rule”