Vancouver Chinese Consulate Suspected to Be Behind Gunman Attack (Photos)

In the early morning of August 2, three armed Asian thugs assaulted practitioner Chunyu Zhang and demolished local practitioners' small hut outside the Chinese Consulate in Vancouver. Following this incident, practitioners across Canada in succession held press conferences and protests outside local Chinese consulates to protest the Chinese Communist regime for exporting its state terrorism into Canada. 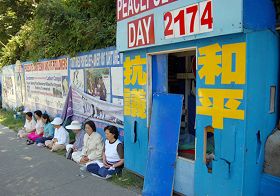 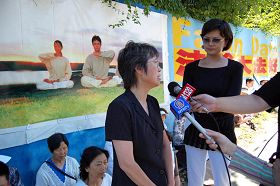 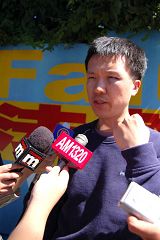 Many newspapers and radio stations, including The Vancouver Sun, The Province, the Epoch Times, News 1130 and Am980 reported this news. Below is the August 3 report from the Epoch Times:

It was about 5:30 in the morning [August 2] when Raymond Zhang's meditation in a hut outside the Vancouver Chinese consulate was violently interrupted. Three men approached on foot and began to tear down signs and a banner from the consulate fence. They then put a gun to Zhang's head, pulled the trigger repeatedly and started to punch him in the face and head.

"The gun was pointed at my left temple," said Zhang. "The guy pulled the trigger constantly and yelled 'Get way from here! Don't stay here!'"

The other two men joined in the assault, kicking holes in the side of the hut and punching and kicking Zhang in the stomach and head. The attack left Zhang, 33, with a fractured bone on the left side of his face, internal bleeding, and bruising.

According to Zhang, the men were all Asian, and Falun Dafa Association of Canada (FDAC) spokesperson Sue Zhang says there's no doubt that the "cowardly act" was instigated by the communist regime in Beijing through the Vancouver Chinese consulate. The Chinese Communist Party (CCP) instigated a crackdown on Falun Gong in 1999, and has since been conducting a large-scale persecution of practitioners in China, says Ms. Zhang.

Constable Howard Chow, Media Relations Officer for the Vancouver Police Department, says that by the time the police reached the protest site the attackers had already fled, and an investigation into the incident is ongoing.

Mr. Zhang believes the assault is yet another example of the "long arm of Beijing" reaching into Canada, continuing what he calls a pattern of "intimidation and harassment against overseas practitioners."

"This is the Chinese Communist Party's way of expanding the persecution into Canada," said Mr. Zhang. "This very violent and physical attack is another attempt to try to remove us from the consulate."

Vancouver Falun Gong practitioners have been holding an around-the-clock peaceful protest outside the consulate on Granville Street for over six years. This was not the first time that Raymond Zhang had been assaulted at this location. Last August he was attacked and punched by Asian thugs, who then fled in an SUV. Other practitioners keeping vigil at the site have had eggs thrown at them from passing cars, and one was sprayed with an unknown liquid.

Across the country, incidents of assault, intimidation and harassment toward Falun Gong practitioners have been reported over the years. These incidents often involve the Chinese embassy and consulates directly, or involve persons in the community directed by the Chinese officials, according to FDAC.

In 2001, Mr. Xueliang Wang was beaten inside the Ottawa embassy for taking a picture of a display of hate-literature targeting Falun Gong. Rob Anders, MP, was roughed up in the House of Commons by Chinese embassy staff because he wore a t-shirt calling for an end to the persecution in China.

Reports filed at local police stations across the country detail barrages of harassing phone calls and email attacks originating in China to homes of practitioners in Canada. Practitioners say they have also been deprived of their legal rights and benefits, such as refusal or delay on the part of the consulates in issuing visas or renewing passports, and loss of membership in certain overseas Chinese organizations.

In March of this year, Ms. Jiyan Zhang, the wife of a Chinese diplomat in the Chinese embassy in Ottawa, defected and exposed the existence of a political office inside the embassy specifically for spying on and attacking Falun Gong and others considered dissidents in Canada.

"The Chinese Communist Party are thugs--they've proven that over and over again. They have no respect for human life and they believe they can bully people into doing anything," said Brian McAdam, an ex-foreign diplomat and Asian organized crime expert.

McAdam says that with the sort of violence inflicted on Raymond Zhang, it's "crucial" that governments at all levels--particularly the City of Vancouver--provide protection to the Chinese community in Canada.

"There have never been any consequences for the Chinese government's behavior in Canada," says McAdam. "The incredible thing is the Canadian government hasn't taken a hard stance on their activities, and they have to. They can't allow a foreign government to carry out this kind of intimidation."

Police are probing claims that a Montreal newspaper, Les Presses Chinoises, is inciting hate against Falun Gong in Canada. Despite two Quebec court orders telling them to stop, the newspaper has published four special editions condemning and demonizing the meditation practice.

On a recent visit to Canada, Chen Yonglin, a former diplomat at the Chinese consulate in Sydney, Australia, warned that Chinese spies and front organizations are widespread here, including those targeting groups persecuted by the regime in China.

In a press release, FDAC is calling on the Canadian government to demand that the "Chinese consulate officials immediately stop harassing, distributing hatred, and attacking Falun Gong practitioners in Canada, or face expulsion."

Raymond Zhang, whose mother and sister have been imprisoned in China because they practice Falun Gong, says he will continue to maintain a presence at the consulate, despite the assault.

"They are still torturing and killing innocent practitioners in China, so I will keep coming until the persecution is over," vowed Zhang.