The 58th Seafair Torchlight Parade was held on a 2.5-mile-long avenue in downtown Seattle on July 28, 2007. The magnificent Falun Gong procession, composed of two hundred Falun Gong practitioners, unfolded beautiful scenes to three hundred thousand cheering spectators. The Seafair Torchlight Parade is one of the top ten parades in the U.S.. Among the well-selected one hundred and ten participating groups, the Falun Gong procession fascinated spectators lining the streets and the seven hundred thousand watching on TV. 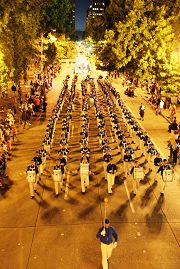 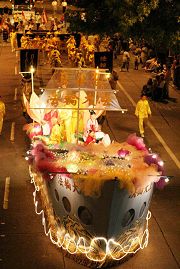 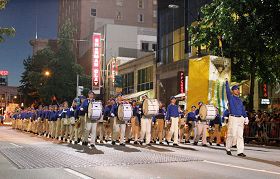 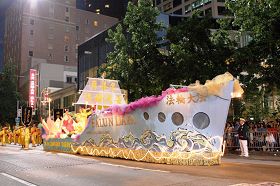 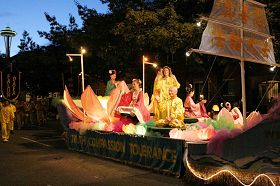 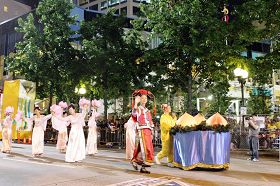 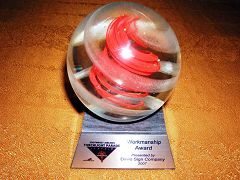 
Themed as "A Mythical Voyage into the Majestic & Ancient Tang Dynasty," the Fa Boat float won the Workmanship Award of the parade. The sponsor of the parade issued the trophy. Two navy sailors brought a silk banner to the front of the Falun Gong procession to present the gift. KIRO 7 live-broadcast the parade.

As soon as Falun Gong procession appeared on TV, the commentator introduced, "Now coming down the Fourth Avenue is the ever so graceful Falun Dafa meditation group!"

The Celestial Band of 140 musicians headed the procession and opened a gate from the west to the mysterious eastern world. Military bands are very popular in western parades. But a band as large as the Celestial Band is rarely seen. David, a spectator who used to be in military band, said he had never seen such a large band.

The band members ranged from thirteen-year-old to sixty-year-old. They played "Falun Dafa Is Good" "America, the Beautiful" and other music. Their high spirit, neat alignment and sonorous music led people to a mysterious eastern world. The spectators awarded them with warm applauses and cheers.

Following the band were celestial maidens in the heavenly world. Six of them danced gracefully with lotus lights in hand.

"Look!" "You are gorgeous!" Marveling at the beauty, many spectators stepped into the street to take pictures of the celestial maidens.

The Tang Dynasty, as a pinnacle of the five-thousand-year history of China, has been regarded as the true symbol of China. The Tang Dynasty valued virtue and respect for heaven and earth. People lived happily. Officials lived up to their duties. The country prospered. Almost everyone in the Dynasty practiced cultivation.

The Fa Boat float has a very unique design and won the Best Workmanship Award. It showed the most important part of the divine culture, cultivation.

Guarded by two mighty warriors with swords, the boat braves wind and waves. The golden words "Falun Dafa" on the blue boat looked solemn. Seven Chinese and western Falun Gong practitioners demonstrated the Falun Gong exercises on the boat. "Colorful clouds" floated between lotuses and leaves. They were merged in a peaceful atmosphere.

Many spectators copied the movements of the fifth exercise. Spectators cheered and clapped. "This is the best float!" "Big boat is coming!" "Your boat is huge!" A high school student had heard about a big boat in last year's parade and came to watch it.

The commentator of KIRO 7 said, "The Falun Dafa float this year, Mythical Voyage into the Majestic & Ancient Tang Dynasty, is this year's Workmanship Award winner." "This is very impressive! I have to tell you. Down the street is a very imaginative float! Very beautiful! Very colorful!"

Following the float was a group of waist drummers. Two stately looking man Falun Gong practitioners holding banners of "Falun Dafa" and "Truthful-Compassion-Tolerance" headed the drum troupe. The drummers played "Falun Dafa Is Good" and "Celebration." Many spectators beat to the rhyme of the music. Quite a few played "Falun Gong Is Good" with the flutes they bought from street vendors. The drum rhyme happened to perfectly coincide with the music of the Celestial Band. The concerted action reached great effect.

The annual Seafair is a large activity in the northwestern U.S. every summer. More than thirty events happen throughout July and August. The parade, called the diamond of Seattle, attracts many thousand tourists. Some spectators took the best locations with their stools the day before the parade. A tourist group flew all the way from Europe to watch the parade this year.

Falun Gong has been invited to the parade every year since 2005.