On August 11 and 12, the Toronto Service Center for Quitting CCP held events in Chinatown and Pacific Mall Square in north Toronto to support the twenty four million withdrawals from the CCP and its affiliated organizations. 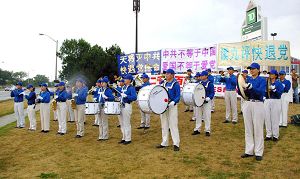 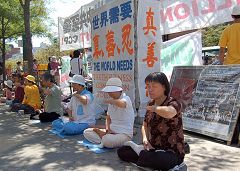 Meditating on a hot summer day 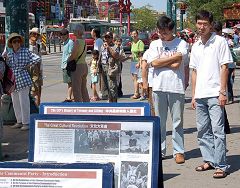 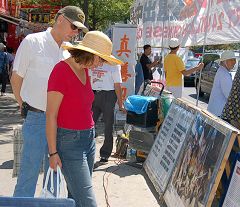 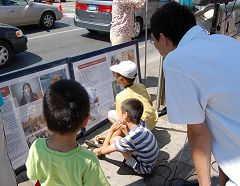 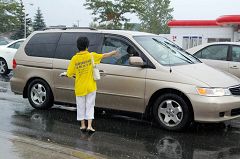 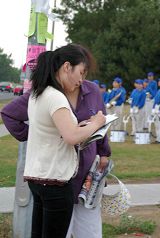 Signing to quit CCP and its affiliated organizations

Toronto's Annual Chinatown Festival was held on August 11 in Chinatown in mid-Toronto. More than sixty green tents were set up. There were two stages with one at each side of the sixty tents. Dancing and singing continued on both stages without interference to each other. Under strong sunshine, crowds of visitors appeared.

A practitioner spoke to passersby over a microphone, "Ladies and gentleman, we have continued to stage truth-clarification here for eight years whether it is cold winter or hot summer like today. What we want is only to tell you that Falun Dafa is wonderful. Heaven will destroy the CCP. Quit the evil organization quickly."

Zhang Menghua in the booth of service center for quitting CCP said, "A Chinese girl who has been in Canada for four years watched the posters attentively and listened to the explanation on the importance of quitting CCP and its affiliated organizations. She made statement to quit CCP's Young Pioneers on the spot."

Ms. Zhang said, "After several years of truth-clarification in Chinatown, the hatred and opposition among Chinese people here has become less and less. More and more people agree and accept truth-clarification literature. People are awakening. We think such an event is important since they need to know the importance of quitting the CCP and how to quit."

Ms. Zhang Fen, a volunteer of Service Center for Quitting CCP, said happily to everyone during setting up the booth, "I called China this morning and helped 23 Chinese people to quit CCP and its affiliated organizations using their real names. It is Chinatown Festival today. So many people know the fact here. I am truly happy for them."

2. Calling in the rain

At noon of August 12, in intersection in front of Pacific Mall Square, Toronto Service Center for Quitting CCP held an event to support the 24 million Chinese who have quit the CCP. The Divine Land Marching Band played on site. Drivers passing by expressed their support by honking their horns or giving thumbs up. Those stopped in the intersection asked for literature.

At 2 p.m, it suddenly rained. The band did not move at all, but continued playing. The players were all wet. They played more actively and the music sounded louder and louder. The reporter was touched and took photos in the rain.

Player Ms. Jin said regarding performance in the rain, "A big rain does not matter for Falun Dafa practitioners. We performed in the rain. From people's response and expression, I think that people could understand our effort. Those passing by looked at our banners and drivers asked for literature."

Ms. Wang who held a banner said, "The band playing was touching. I saw some drivers did not move until those behind them honked after the traffic light turned to green. Many passers-by came to ask for information after hearing the band play."

Another Ms. Wang, who distributed truth-clarification literature, helped a Chinese girl named Lin Jing to sign a statement to quit the CCP Youth League and Young Pioneers. Later Ms. Wang explained, "The girl is a student here. She is very kind. She said she was sympathy toward Falun Gong. After I explained the evil nature of CCP, she signed the statement to quit the Youth League and Young Pioneers right away."

“Western Practitioner: the Path that Led Me to the Fa”