A German Citizen: "I am in Awe of Your Courage." (Photos)

The fifth Frankfurt Cultural Festival parade was held in downtown Frankfurt, Germany, and over 60 groups from different countries participated, some wearing tribal costumes and parading ornate floats. One purpose of this cultural festival is promoting acceptance of foreign cultures, so that Frankfurt can be a city known for its cultural diversity. One hundred and eighty ethnic groups in this city from other parts of the world work to mutually understand one another, live peacefully, and make progress. The Falun Gong group has taken part in this activity since the first year of the parade. This year, over 180 Falun Gong practitioners paraded through the streets. 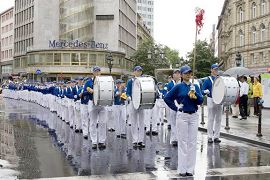 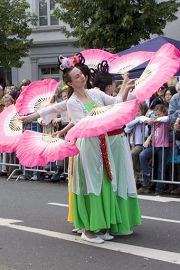 Though their costumes are soaked through, the thunderstorm does not dampen Falun Gong practitioners' spirit to perform in the parade 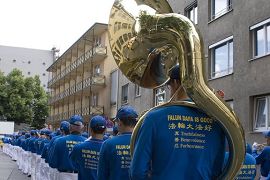 It takes great endurance to carry a sousaphone of this size for several hours, while performing along the way.

The Divine Land Marching Band participated in the Frankfurt Cultural Festival for the first time, with their resounding drums and the powerful bass lines of the sousaphones. The Divine Land Marching Band consists of 135 Falun Gong practitioners from Germany, Britain, Ireland, Sweden, Norway, France, the Netherlands, Austria, Switzerland, and Spain.

Seeing the performance of the Divine Land Marching Band, a police officer could not help saying, "It's amazing!" The appearance of the Divine Land Marching Band drew attention from the audience and earned enthusiastic applause. When the Falun Gong group passed by, Mr. J, a forty-year-old African who lives in Frankfurt, said, "It's wonderful. What an orderly team, distinguishing itself from the others. That marching band particularly appeals to me. They look splendid and impressive."

Watching the Divine Land Marching Band, a Spaniard living in Frankfurt said, "At first I mistook it for a German marching band. But now it appears to surpass the other teams. How incredible it is."

The elegant melody of the song "Falun Dafa Is Good," together with exquisite fan dancing and lotus dancing, led the spectators to appreciate ancient Chinese divine culture.

After seeing the parade, one gentleman said, "I belong to the Bolivian team. I could sense the peace and harmony that emanates here. Your music can bring us calm. Therefore, I walked toward you."

After the parade came to an end, its organizer Ms. Jander praised the Divine Land Marching Band and expressed her eagerness to see the band perform next year.