Ireland: Candlelight Vigil Held On a Rainy Night to Expose the Crimes of the CCP (Photos)

(Clearwisdom.net) On July 20, 2007, Falun Gong practitioners in Ireland held a candlelight vigil to commemorate those fellow practitioners who have been tortured to death by the Chinese Communist Party (CCP) since July 20, 1999, and to expose the CCP's crimes. 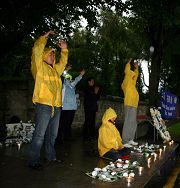 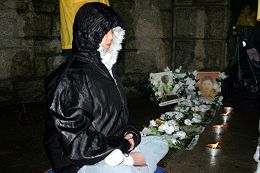 In the rain, Falun Gong practitioners protest against the persecution

At about 6:00 p.m., Falun Gong practitioners held a protest in front of the Chinese Embassy in Ireland. They held a banner reading, "Heaven's Destruction of the CCP is Imminent. Quit the CCP and its Affiliated Organizations to Save Lives." A wreath with the word "Mourning" stood in front of the Chinese Embassy, with dozens of small wreaths spread around. Although the weather was bad and it rained continuously, practitioners practiced the exercises along with the music.

While the practitioners practiced the exercises, many vehicles passed by and drivers sounded their horns showing their support. An Irish lady stopped in the rain and watched for ten minutes. As soon as the exercise music stopped, she walked forward and asked for the facts about Falun Gong. Finally, she wrote in the petition book, "Please continue doing such good deeds."

Upon seeing Falun Gong practitioners conducting the protest in such bad weather, one young man was so touched that he wanted to take a photo.

Before leaving, practitioner Mr. Zhao Ming said, "Although the weather today is terrible and it has been raining, our candlelight is not extinguished. During the eight-year persecution, Falun Dafa has spread across the world. In contrast, the CCP is heading for disintegration in their persecution of Truthfulness-Compassion-Tolerance."

"More than twenty-three million people have already withdrawn from the CCP. The day of the CCP's disintegration is imminent. For these eight years, we have proved a principle, that is, peace and kindness prevails over evil. Our anti-persecution is meaningful for people of the future."