(Clearwisdom.net) On July 22, 2007, Falun Gong practitioners in Malaysia held a "Truthfulness-Compassion-Forbearance" Art Exhibition in Kuala Lumpur to expose the facts of the persecution. 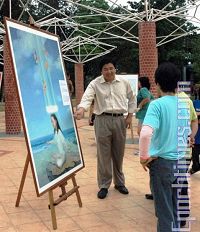 Clarifying the facts about Falun Gong 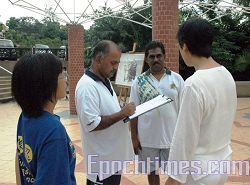 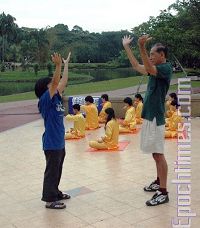 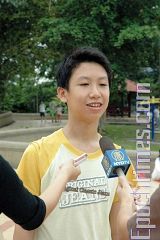 Zhu Jiayue said: "Why does the CCP persecute them? They didn't do anything wrong?" 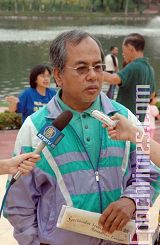 "It is really brutal. I cannot believe that it exists in the 21st century."

Many people were attracted to the exhibition. Falun Gong practitioners demonstrated the exercises and passed out truth-clarifying materials. Many citizens were shocked by the brutal persecution and signed their names to support the practitioners.

An engineer said: "The art works are excellent and the content is profound." He expressed his support.

A gentleman from Indonesia has come to the exhibition three times. He thought that the persecution manifested by the paintings happened in the past. He was extremely shocked when he learned that the persecution is continuing into the 21st century. He said the Indonesian people were tortured by the communist party before 1965, but he didn't know that Chinese people are still being tortured by it now.

Three brothers from Kuala Lumpur viewed the art works. They asked: "Why is the CCP persecuting these kind people? They didn't do anything wrong. The persecution is really bloody. We must stop it."

A gentleman from India expressed his interest in learning the exercises. He liked the painting, "Pure Lotus." He said the artist must have reached a very high realm during meditation, because he could sense the pure energy.

Many people praised Falun Gong practitioners' courage and encouraged them to continue their efforts against the persecution.

“Singapore: Practitioners Hold Series of Activities to Clarify the Facts about the Persecution (Photos)”