(Clearwisdom.net) On July 20, 2007, Mr. Gao Zanji, the County Council Member of Taichung and the talk show host of the Sound of Ocean Radio Station, invited Falun Gong practitioners as his guests on the show. These practitioners had been violently deported by the Hong Kong government around July 1. 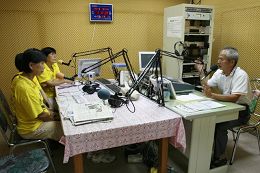 During the talk show, which was about two hours long, Mr. Gao pointed out that due to the Chinese Communist Party's pressure, the Hong Kong government violated the human rights of Taiwanese. He mentioned the book--the Nine Commentaries on the Communist Party and recommended it to the listeners. Mr. Gao said that some Taiwan media have been controlled by the CCP, so they don't report some sensitive events, such as Falun Gong.

Liu Wenge, a reporter from the Epoch Times, said that he was deported by the Hong Kong government, even though he had the legal travel documents. He said the reporters from Sound of Hope Radio and New Tang Dynasty TV were also deported. The worst thing was that the policemen searched them violently. A female reporter was even forced to take off her underwear during the search.

Lin Gui, a Chinese medicine doctor, said she had been to Hong Kong dozens of times. Now she was deported before the 10th anniversary of Hong Kong's return to China. She pointed out that the "one country, two systems" sometimes seems more like "one system, two countries." She also pointed out that Falun Gong practitioners handled the violent deportation in a peaceful way.

Ms. Tang Huiru said she had a good impression of Hong Kong before, but now this violent and unjust deportation completely ruined it. She said it was the most insulting thing she had experienced in her life being wrapped in a blanket and carried out of customs.

During the talk show, many people called in. Some of them expressed that the Taiwanese government should take action on behalf of their people.

“Singapore: Practitioners Hold Series of Activities to Clarify the Facts about the Persecution (Photos)”