Austria: Almost Eight Years Have Passed Since the Beginning of the Systematic and Brutal Persecution of Falun Gong Practitioners in China (Photos)

(Clearwisdom.net) June 23, 2007 provided two reasons for a demonstration in downtown Graz, Austria. In 1948, the Olympic Committee declared June 23 "Olympic Day." In 2008, the Olympic Games will be held in Beijing, China. The Olympic Games are built on the premise "Fairness and Justice," precisely the opposite of today's human rights situation in China. Many hold the high hope of a betterment of the human rights situation in China with the promise of the Olympic Games. Alas, even before the Games are held in China, one can already see that this is a false hope. A blacklist has been distributed by the Chinese Communist Party (CCP), on which forty-three different categories of undesirable people that should not be allowed to come to China for the Olympics are listed, among them Falun Gong practitioners. 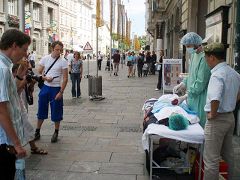 People are shocked by the CCP's organ harvesting.

Reading the facts about Falun Gong 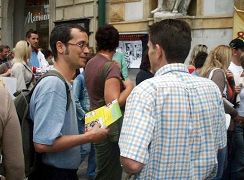 Clarifying the facts about Falun Gong

Almost eight years have passed since July 20, 1999, the day when Falun Gong practitioners began to suffer under a systematic and brutal persecution by the CCP regime. Imprisoned practitioners do not only produce "cheap merchandise" in many of China's forced labor camps, but the Chinese regime also uses these people as living organ donors against their will. The former Canadian Secretary of State (Asia Pacific) David Kilgour and well-known international human rights lawyer David Matas conducted an independent investigation into the allegations and verified the aforementioned information. Their conclusions were published in their investigative report "Bloody Harvest."

On June 23, the streets were busy as the city had also organized a large activity. Many people stopped at the information booth and showed visible shock at the anti-torture exhibition depicting organ harvesting from living Falun Gong practitioners in China. The practitioners explained the acts that the cold-blooded CCP perpetrates on its citizens. Many of the townspeople signed a petition calling for an end to the organ theft and the persecution.

One man couldn't understand why Falun Gong, such a good practice that instructed people to be good, was persecuted by China's Communist regime. He understood the ruthlessness of the CCP after a practitioner explained the background behind the persecution. The practitioner explained that the CCP and Jiang Zemin, the then head of State, were afraid to lose power. They were afraid of people who lived by the principles of Truthfulness, Compassion and Forbearance and who could see through the lies and corrupt behavior of the regime. They were afraid of people who could choose between good and bad. The man felt regret about the situation in China, thanked the practitioners from deep within his heart and wished them great success in their hope of ending the persecution.