(Clearwisdom.net) On April 11, 2007 Dafa practitioner Xu Juhua from Tianhe District, Guangzhou City was taken away from home by the police from the 610 Office and the National Security Bureau. She has been detained for over a month. At present she is still at the custodial station in Tianhe District and is being persecuted there. The local authorities continue to refuse to allow her family to visit her and have ignored the family's demand for her unconditional release.

Over ten days ago police threatened Xu's husband and tried to force him to sign her detention warrant. Her family members firmly refused. Recently, in an attempt to prepare for their illegal trial and further persecution of Xu, the government officials are spreading rumors at Xu's husband's work unit (the Ministry of Information Industry No 5 Institute Guangzhou).

Xu was an English teacher at the Guangzhou City Electronic Secondary School. In December 1994 she attended the fifth Falun Gong Seminar given by Mr. Li Hongzhi in Guangzhou. Later she volunteered to be the deputy assistant of the Wushan District Practice Site in Guangzhou. After July 20, 1999, she went to Beijing to appeal for Falun Gong twice. She tried to clarify the facts about Falun Gong to the relevant departments but was arrested, and she was sent back to her school. She didn't waver in her belief under the local authorities' coercion and trickery. As a result she was forced to leave her position at the school by the CCP. She next worked at a cleaning job at the school, and then she was fired. She was sentenced to three years in a forced labor camp and was kept there even after her sentence was over.

In March 2000 Xu was illegally detained in the Tianhe Custodial Station in Guangzhou for one year and eight months. Because she refused to give up her beliefs, she was put into a solitary confinement cell and locked there for five days. Xu said: "In the confinement cell, they cuffed the foot shackle and handcuff together and put one of my hands underneath my bottom and handcuffed it to the other hand. Thus I was unable to sleep, walk, stand, go to the toilet or eat. I could only walk half squatting."


Illustration of a torture method

Later Xu went on a hunger strike to protest the torture. The police used iron shackles weighing 70-80 pounds to immobilize her feet, and thus she was unable to walk. She was kept in this position for 47 days. It was in February with freezing cold weather, but she only wore thin clothing. She said: "In such cold weather they made me sleep on the concrete floor and switched on an electric fan 24 hours a day and blew it in my face. When sleeping, I felt stinging cold with my feet cuffed by heavy iron shackles. I was not able to move. I would be woken up by the pain if I even moved a bit. I bit my lips to bear the terrible pain. My lips often bled.

Xu said that at the custodial station, practitioners contracted scabies due to the poor hygienic conditions. The skin was so itchy that it was unbearable. They scratched it until the skin was torn and bleeding. The whole body was covered with damaged skin and bruises.

From February 2002 to September 18, 2003, Xu was detained in the Chatou Forced Labor Camp in Guangzhou City. In October 2002 Xu was put into a solitary confinement cell and monitored by two drug addicts. She said: "One day one of the drug addicts pushed me down and laid her body on top of me, and the other one also came and lay upon me. Each of them weighed over 80 kilos. I heard a sound and I felt my lumbar vertebra joint was swollen. They also forced me to sit cross-legged and then bound me with ropes. They punched and kicked me. They hit me on my temples. They let bugs and scorpions bite my eyelids, hands and feet. They tied up my hands from behind and pulled them up. They poured hot chili sauce into my mouth. They tortured me like this for 17 hours before they untied me." 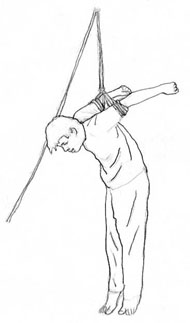 Illustration of a torture method

“Nothing Gained and Nothing Lost”