Germany: Informing the People of Stuttgart about Falun Dafa and the Persecution Taking Place in China (Photos)

(Clearwisdom.net) On May 19, 2007, Falun Gong practitioners in Stuttgart, a city in southern Germany, held a Falun Dafa Information Day. Since it was the final day of national football league matches, football fans from around the country were everywhere. 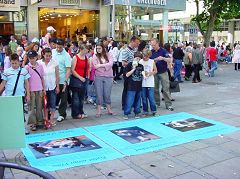 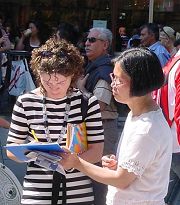 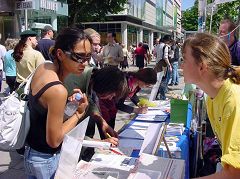 In the early morning, practitioners set up a tent, put up demonstration boards, and hung ''Falun Dafa is Good'' banners in both Chinese and German. The event was held on King Street near the train station. The streets were very busy with crowds of visitors coming to town for the football matches.

In the morning, the activity became a little difficult due to football fans drinking, laughing and talking loudly; it was very difficult for them to calm down and pay attention to the persecution taking place in China. There were only a few passersby willing to find out more. But the situation changed in the afternoon after the match was over. People were attracted by the information boards and the vivid pictures laid out on the ground.

The activity progressed very successfully. Most of the passersby were willing to sign a petition in support of Falun Gong. They were shocked by the facts of the Chinese Communist Party (CCP) harvesting organs from living Falun Gong practitioners. An old man who could not speak or hear signed the petition form after reading it carefully. A young girl said she saw Falun Gong practitioners' performance in Vancouver. She thought that they were a peaceful group and should not be persecuted. A man with her said that he had read the main text of Falun Dafa, Zhuan Falun. They all signed the petition and said that they were happy to see that Falun Gong practitioners were here. Two high school girls took copies of the "Nine Commentaries on the Communist Party'' and other materials, as they were doing a project related to China.

According to the local newspaper, hundreds of thousands of football fans came for the tournament. Tens of thousands of people passed by the practitioners' booth in a very short few hours, and many stopped to learn the facts about the persecution.

“New York: Reception for the Truth-Compassion-Tolerance Paintings Exhibition Held, Artists Call for an End to the Persecution (Photos)”