(Clearwisdom.net) Hanjia, Weihong and Pingdong are third-year students in the same class at a middle school in Taiwan. They have become good friends because they share similar interests. They are 15 years old, but they are very tall and strong for their age. They smoke behind the backs of grownups daily. Sometimes they even drink alcohol together. The biggest challenge they pose to my fellow schoolteachers is that they are very rude and confrontational in their manner and behavior. Hanjia is the most rebellious one of the three. He has repeatedly confronted his teachers and caused a lot of tension at school.

Less than a month before their graduation, the school decided that Hanjia might not be able to graduate because his academic and behavior records were way below par. On the other hand, their parents and teachers tried hard to help them improve with little to no progress. In order to share my colleagues' workload before the graduation, I took over this case. This time I didn't use any consultation skills that I am very good at. Instead, I read Zhuan Falun to them. In less than 20 minutes time, one miracle happened after another. I am confident to say that these three teenagers will not become my work cases, but my fellow Falun Gong practitioners. 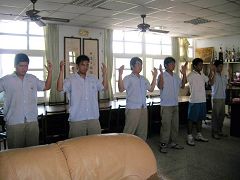 One day after lunch, the three of them showed up in my office for the scheduled appointment and took a seat on the sofa with a serious look on their faces. But when they saw me picking up Zhuan Falun, they exchanged looks and broke into laughter. I immediately thought of a passage of the Fa from Zhuan Falun. Teacher said,

"[...] a practitioner must be tolerant. Some people will lose their temper in disciplining children and yell at them, making quite a scene. You should not be that way in disciplining children, and neither should you, yourselves get really upset. You should educate children with reason so that you can really teach them well." ("People with Great Inborn Quality" in Lecture Nine of Zhuan Falun)

Remembering this passage of the Fa, I returned their jeers with a friendly smile. Next I invited them to sit up straight in jie yin position with their eyes closed while I read Zhuan Falun to them.

I started to read, "'The Buddha Fa' is most profound; among all the theories in the world, it is the most intricate and extraordinary science." (Lunyu) Right after I started reading Zhuan Falun, the three of them trembled slightly and no longer acted disrespectfully. When I progressed to the second and the third paragraphs, they felt slightly warm, with a headache and pressure on the chest, as they told me later. Hanjia felt he had trouble swallowing. After reading "Lunyu" for the first time, I took the opportunity to explain that being verbally or physically hostile to others will cause one to lose virtue and gain karma. I also explained briefly that feeling physically unwell is only temporary while their bodies are being cleansed and that they shouldn't be worried. I also pointed out that these symptoms may be a result of karma accumulated from being hostile to their teachers, parents and peers. It appeared that these words touched their hearts because they kept nodding.

After I read "Lunyu" for the second time, they looked slightly pale and felt exhausted. They continued to experience the aforementioned symptoms. Weihong retched a bit and then stopped. I asked them politely whether they wish to listen a third time. They replied in accord that they wanted to endure the pain because they wanted to listen to it once more. I started reading "Lunyu" at a slow pace again. I felt an energy flow circulating in the room. It was as though the three troubled teenagers' negative energy had been dissolved. I continued to read, "Throughout the ages, only 'the Buddha Fa' has been able to perfectly provide a clear exposition of humanity, every dimension of material existence, life, and the entire universe." ("Lunyu")

After I finished reading the last paragraph, the three of them ran quickly to the restroom. I followed them with a plastic bag in my hands. But I was too late. Weihong vomited in the wash basin. Hanjia vomited in the toilet and had diarrhea. While the two of them were cleaning up, they shook in amazement of the miracles. But they felt much better physically and mentally. Pingdong told me that he didn't feel like throwing up, but he had a lasting headache. I reminded him what he did last Friday. Pingdong was very rude to a schoolteacher. He also injured a classmate's arm when playing a joke. I advised him to apologize to them. Later, Pingdong told me that his headache was gone after he apologized to the teacher and the classmate.

During lunch break the following Monday, they came to my office again and brought three other boys with them. Weihong started by saying with a smile, "This weekend we didn't do anything bad. Could you read "Lunyu" to us again?" I was very touched to hear Weihong's words. The three boys listened to the Fa for less than 20 minutes, but it improved them so quickly. When I read "Lunyu" again for them, the three of them felt great physically and mentally. It is worth mentioning that Weihong felt very warm in his right knee, which was injured in a car accident and underwent surgery. They took turns touching Weihong's right knee and were amazed by the miracle. Haobo listened to "Lunyu" for the first time. He felt a pain in his lower back. Tingwei felt pain in his shoulder. Hongkun didn't feel anything, so he smiled and declared, "I am a good person and I don't do anything bad, so I don't feel anything!" This is only his personal understanding and it might not be correct. At a minimum, they have realized that they should become good people and that they must not do anything bad any more or they will lose virtue.

Because they needed to prepare for the high school entrance examination, they were busy and didn't come to my office again. The six boys came to my office again on Monday following the examination week-end. After a brief chitchat, they asked to listen to stories of cultivation. I told them a story of a woman whose multiple illnesses were healed after she started to practice Falun Gong. She even saw with her celestial eye that she had met Teacher in many of her previous lives. These kids were sitting in jie yin position while listening to the story. I felt enveloped with a powerful energy field. Afterwards, Bohao said, "Now I know Falun Gong cultivation practice will turn a cultivator into a better person and make him healthy. It is even better than medicine!"

Before I went to the next class, I turned on my computer and showed the kids one of Teacher's photos. When they saw a photo of Teacher in a business suit sitting on chair with a smile, the six of them exclaimed in unison, "It's amazing. We feel warm..."

These were extraordinary experiences for these kids. I believe that this was the most important lesson for them in middle school or even in their entire life.

“Closing the Gap and Cherishing the Fleeting Predestined Relationships Between Practitioners”