This week Monash Life explores the peaceful journey of Jane Dai and her quest to spread the word of FalunGong.

When Jane Dai's husband Chengyong Chen lost his life fighting for his beliefs the couple's daughter was just a baby.

Fa Du Chen will never remember the short time she spent with her father and must now learn about the strong-willed man through stories and photographs.

Ms Dai said her husband was one of thousands of Chinese people persecuted for following Falun Gong, a practice that focuses on meditation, exercise and the principles of truthfulness, compassion and forbearance.

Falun Gong is reported to have 100 million followers worldwide but was outlawed by former president of the People's Republic of China Jiang Zemin in 1999.

Ms Dai said her husband died in 2001 after being arrested for publicly supporting Falun Gong. Since his death, Ms Dai and her daughter have traveled the world to bring awareness to the plight of the thousands of Chinese people who have been arrested for supporting the practice.

Ms Dai's humanitarian work was recognized last month with an award from the Australian Altruism Foundation at a ceremony in Hawthorn. She was one of five recipients of the Turtle Awards, which acknowledge "leaders who have stuck out their necks for the common good."

The tireless campaigner and her now seven-year-old daughter have visited 45 countries since 2002 to speak with politicians, lawyers and humanitarian organizations.

"It was very painful for me but so many mothers and children don't get a chance to speak out so I wanted to take my chance," she said. "It's very important to stop the persecution because the children are suffering, children are innocent, children are beautiful and they don't deserve that."

Ms Dai, who is based in Glen Waverley when visiting Melbourne, migrated to Australia from China in 1992. She became an Australian citizen but said she was still searching for fulfillment in her life and decided to move back to China in 1997. There she discovered Falun Gong and met and married her husband, who continued to publicly support Falun Gong following its ban in 1999.

After Chengyong's arrest in 2001, Ms Dai's visa expired and she was forced to return to Australia where she learnt, through a Falun Gong website, that her husband had died.

Ms Dai's story has been told in a documentary Plum Blossom in Snow by Swedish filmmaker Elefteria Kalogrista, whom she met in Geneva in 2002 at a meeting of the United Nations Human Rights Commission. 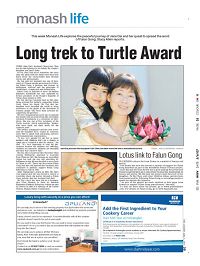 Jane Dai, pictured with daughter Fa Du Chen, has been honoured with a humanitarian award.

In Chinese culture the lotus flower is a symbol of beauty and purity.

The flower has now also become a symbol of support for Falun Gong followers as part of the worldwide Petals of Peace project.

Jane Dai said the lotus flower was a good analogy for persecuted Falun Gong followers as it came from the mud but maintained its beauty and purity. Ms Dai said the project used the story of her daughter, Fa Du Chen, and other children whose parents have been persecuted for following Falun Gong, to encourage people to speak out against the injustice.

"As part of the project we teach children to fold paper lotus flowers to support Falun Gong practitioners," she said.

To find out more about the project, go to www.petalsofpeace .com. For details on Falun Gong, go to www.faluninfo.net.

“The Innermost Thoughts of Young Practitioners from Kaohsiung, Taiwan (Part 2)”