(Clearwisdom.net) On May 25-26, 2007, Falun Gong practitioners from Utah attended the Scandinavian Heritage Festival. They introduced Falun Gong to the public and exposed the persecution of Falun Gong in China. 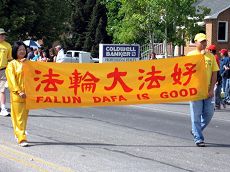 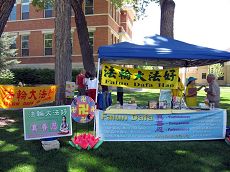 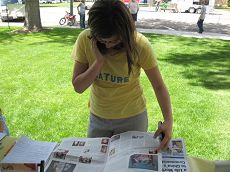 Learning the facts of the persecution 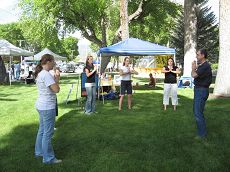 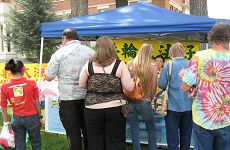 Many people want to know more about Falun Gong 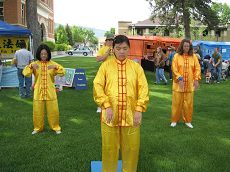 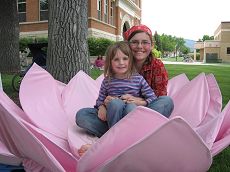 This young girl, who helped practitioners to clarify the facts to her family and collect signatures, is taking a photo with her little sister in the lotus flower

During the event, many people wanted to know about Falun Gong. They were shocked by the brutal persecution and many signed their names to support Falun Gong practitioners. A young girl, who learned the facts of the persecution, held the truth clarifying newspaper and shouted, "I am going to show this to the president of United States." She helped practitioners to clarify the facts to her family and friends, who signed their names to support the anti-persecution efforts.

On May 26, practitioners took part in the festival parade. Many people watched the parade. Although the practitioners' group was not very large, the lovely lotus flower and two girls demonstrating the exercises in the lotus flower won a lot of applause. The waist drum performance was also warmly welcomed.

“Bosnia-Herzegovina/Sarajevo: Practitioners Inform the Public about the CCP's Persecution (Photo)”