New Mexico: Mayor and City Council of the City of Las Cruces Proclaim May 13, 2007 as Falun Dafa Day

: Falun Dafa, also known as Falun Gong, was introduced to the public in China by founder, Mr. Li Hongzhi, in 1992 and is currently practiced in over 80 countries by over 100 million practitioners; and

: Falun Dafa is a traditional Chinese self-cultivation practice, based on the principles of Truthfulness, Compassion and Forbearance that attracts millions of people of all ages and backgrounds; and

: Volunteers have worked diligently throughout New Mexico to educate the community and residents of the many benefits to be obtained through Falun Dafa, and the practice has benefited our communities and society as a whole in keeping with New Mexico's diverse culture and optimum quality of life, and

: Since July 1999, the unelected leadership of the Chinese Communist Party implemented a brutal persecution against Falun Dafa, with more than 3,000 practitioners persecuted to death, hundreds of thousands arrested and tens of thousands forced into slave labor camps; and

: The great compassion and tolerance demonstrated by Falun Dafa practitioners in upholding the principles of their practice under the most severe environments has touched the hearts of people throughout our city, state, nation and world, and

in appreciation of the New Mexico practitioners' commitment to community service and raising awareness of these atrocities that cannot be ignored. 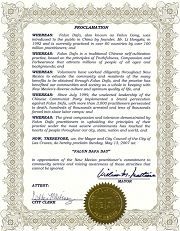