Canada: Mayor James Atebe of the District of Mission Proclaims May 2007 as Falun Dafa Month

That May 2007 be proclaimed "Falun Dafa Month"
Honoring truthfulness, compassion and tolerance
District of Mission Council Resolution - May 7, 2007

, Falun Dafa is an advanced exercise and meditation practice of mind, body, and spirit based on the principles of Truthfulness, Compassion and Forbearance, and

, since its public introduction by Mr. Li Hongzhi in 1992, Falun Dafa has brought health and peace of mind to over 100 million people in sixty countries, and

, more men and women of Canada are learning the practice and purifying their hearts, energizing their bodies, and embracing peaceful, virtuous communities, and

, Falun Dafa emphasizes a holistic approach to health that includes the cultivation of one's moral character by following the universe's benevolent characteristic of Truthfulness-Compassion-Forbearance as well as practicing gentle qigong exercises, and

, hundreds and thousands of Falun Dafa practitioners will participate in the Canada Experience Sharing Conference to be held in Toronto this May.

, be it resolved that the District of Mission hereby proclaim May 2007 as 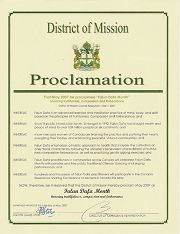