Jared Pearman started to practice Falun Gong in 2001. He is a young fellow who works on internet IT support for the National Geographic Society in Washington, DC. During the past six years, Jared has been to more than a dozen cities around the globe, protesting the persecution of Falun Gong by the Chinese Communist regime. Jared said, "Nothing can alter my determination to stop the persecution. Nothing can sway my firm belief in Dafa." 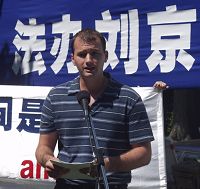 Began Practicing After Reading a Report About the Persecution

Jared then got into contact with a Falun Gong practice site in a park in Orlando. He went to meet practitioners with his older brother Court. Jared said, "What I discovered was that a peaceful group was being persecuted by the Chinese communist regime." After spending two weeks acquiring more information about Falun Gong and learning the exercises, Jared and Court decided to cultivate Falun Dafa.

Shed Light on All Mysteries

"Since I started cultivation, my life has completely changed," Jared said. Before Falun Gong, like many young people in the U.S., Jared abused drugs and indulged in alcohol. Jared recalled, "Back then, I didn't have any concept of 'virtue' or criteria to judge whether a person is good or bad. People of my generation have lost these concepts. For me, morality seemed to mean nothing but spiritual philosophy.

After reading Zhuan Falun, Jared started to understand why one must be a good person and how to become a good person. "I decided I would not curse others any more, no more foul language. Some of the bad habits that I used to feel were very difficult to change were corrected right away."

"Although my parents had taught me principles of how to be a good person, I did not know why we should bother. In my ignorance, I committed many wrongdoings." said Jared, "Through studying Zhuan Falun, it is fairly easy for me to distinguish which thoughts of mine are correct and which are wrong. When I abandon the bad thoughts, I feel my mind is very upright. Each day I wake up in the morning and when I go to work and have conversations with others, I feel everything in my life has meaning. I have come to know the true purpose of life."

Jared went to Beijing to appeal for Falun Gong on February 24, 2002. When he came back to the U.S., Friends of Falun Gong warmly welcomed him back.

In November 2001, 36 Falun Gong practitioners from over ten countries gathered at Tiananmen Square and unfurled a banner that read: "Truthfulness, Compassion, Tolerance." Jared, who had been cultivating Falun Gong for half a year, was deeply moved. He wanted to do the same thing. After he shared his feeling with his brother Court, they both decided to go.

"There is no need to think it over and over. The persecution of Falun Gong is the worst evil I have ever seen. The Chinese communist authority persecutes Falun Gong practitioners simply because practitioners want to be good people. We have always been thinking about how to bring an end to the persecution."

On February 24, 2002, Jared arrived at Tiananmen Square. "Policemen were everywhere, but single-mindedly I wished to yell out loudly 'Falun Dafa is good' in Tiananmen Square. Nothing could stop me. My heart was very pure at that moment."

As Jared was trying to hold up a banner that read: "Falun Dafa, Truthfulness, Compassion, Tolerance," five military police knocked him to the ground. They held his body motionless and started to beat him, fiercely kicking him in the head, face, back and stomach. Then two military police dragged him up by his arms so others could beat his face and head. They took off Jared's shoes and tromped on his bare feet with their boots. One of Jared's toes was fractured. The police slammed him on the ground again. One of them squashed Jared's face very hard with his knees and twisted Jared's arms. Another continuously kicked between his two legs. The pain was excruciating.

Jared was then thrown into a bus. "I saw more and more Falun Dafa practitioners step forward to shout 'Falun Dafa is good' in Tiananmen Square. Their voices could be heard everywhere, one after another. It was truly a magnificent scene," said Jared. "I knew of some of these practitioners; there were also practitioners I didn't know. The police were frightened. They desperately chased and seized practitioners, throwing them into the police van."

Before Jared and his brother departed for Beijing, they wrote an email to their parents, explaining why they wished to go to Tiananmen Square. Jared said, "My parents were scared. They kept monitoring news reports every day, and they were waiting to hear from us. They didn't know much about Falun Gong at that time." When Jared returned to the U.S., he explained everything to his father in detail.

Jared said, "Never before was the relationship between my father and I so intimate. He is very respectful to Falun Gong and the founder of Falun Gong; both have turned my brother and me into good people. I was only 21 years old that year. That was the only time I went to China. It was also the most meaningful thing I have done in my life."

Bringing the Persecution to an End

After Jared came back from China, his life changed. "I want to help to bring an end to the persecution," he said.

Jared traveled to over ten cities including Geneva, major cities in New Zealand, Iceland, Britain, and Canada, clarifying the truth about the persecution of Falun Gong to the governments and people of these nations.

Jared said, "The principle of Falun Gong cultivation is 'Truthfulness-Compassion-Tolerance.' If I were to stay in a comfortable environment, reading Zhuan Falun at home and practicing the exercises on the beach in Florida every day, I would be violating this principle. Where, then, is my morality? My fellow practitioners are still suffering persecution. I must step out to stop the persecution and uphold justice and the truth."

Jared also said, "If I know the truth while others don't and if I know the truth while others still believe lies, then I wish to tell them that the Chinese communist regime is deceiving them with lies. So many Chinese are forbidden from practicing Falun Gong. They cannot benefit from practicing Falun Gong like I do. If I had not tried to stop the wrongdoings of the Chinese government, I failed to live up to being compassionate."