, Falun Dafa (also called Falun Gong) is a self improvement practice rooted in ancient Chinese culture and introduced to the general public in 1992 by Mr. Li Hongzhi; and,

, Falun Dafa consists of four gentle exercises and a meditation that teach the principles of truthfulness, compassion and forbearance (Zhen, Shan, Ren); and,

, Even though Falun Dafa's emphasis on improving one's spiritual, mental and physical health has caused it to spread rapidly across the planet, it is not endorsed in China where practitioners of this regenerative faith have had their rights denied and have been tortured for studying Falun Dafa; and,

, I, John Nations, Mayor for the City of Chesterfield, do hereby proclaim Thursday, May 13, 2007 as

World Falun Dafa Day
In the City of Chesterfield

Given under my hand and the great seal of the City of Chesterfield, this 13th day of May, 2007. 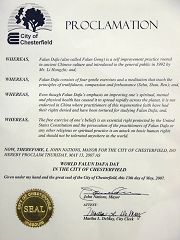 “"The Memory of That Time Will Remain Forever"”