On May 13, 2007, Falun Gong practitioners from Toronto assembled at Dundas Square, Toronto to celebrate the eighth World Falun Dafa Day. Several Parliament members from different parties sent congratulating letters. In his letter, Mr. Steven Harper, the Prime Minister of Canada, praised Falun Gong for its contribution to the multiple-cultures in Canada. 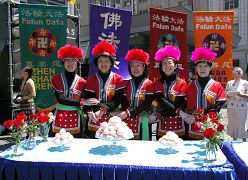 Mr. Zhang Jinzhao, a representative from the Falun Dafa Association in Canada, introduced the history and background of Falun Gong.

Mr. Gerry O'Pray, the former president of the United Nations Association in Canada (Toronto Branch) and Mr. Clement Rodrigo, an Asian Community leader in Toronto, gave speeches. They both praised the spirit of practitioners. 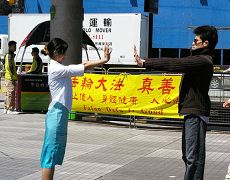 Mr. Xiong, a Falun Gong practitioner, told the reporter that he previously had a very serious illness, but practicing Falun Gong caused it to heal quickly. He also said that his marriage was about to break apart, but right before he decided to divorce his wife in 1996, he started practicing Falun Gong, which taught him to look inward during conflicts. He thus tried to endure and consider others.

Mr. Xiong's son is 13 now, and their family is happy and harmonious.

So, on the Falun Dafa Day, Mickey wanted to say: "Thank you, Master." 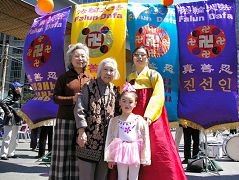 Ms. Sun started practicing Falun Gong in 1997. Her 80 year-old mother had very bad heart disease at that time, and the doctor could not do anything.

Ms. Sun taught her mother Falun Gong. Two days later, her mother felt the Falun in her body and later her disease disappeared.

Ms. Sun's mother is 90 years old now and she is still very healthy.

Ms. Sun's daughter developed a strange disease when she was in college. She had fever every afternoon and doctors could not determine the cause. Ms. Sun then taught her daughter Falun Gong. Her fever disappeared the first day she practice Falun Gong, and never returned.

Ms. Sun said, "It is hard to use human language to describe our appreciation to Master Li. Through our experiences, our friends and other family members know that Falun Dafa is good and the CCP is evil. Most of them quit the CCP."

Practitioners performed dances and sang. Many people enjoyed it and learned the facts of Falun Gong. 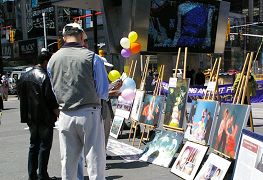 “Canada: Mayor of the Town of Sidney Proclaims May 2007 as Falun Dafa Month”