May 13, 2007 marks the eighth World Falun Dafa Day. Falun Gong practitioners from Queensland, Australia held a celebration in a theatre in Brisbane on May 12. The practitioners invited many guests. They introduced Falun Gong and shared their cultivation experiences. They also performed dances, songs and displayed art works in celebration of Falun Gong. 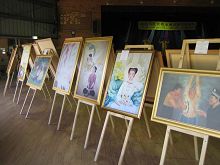 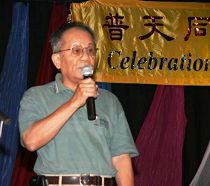 Prof. Qiu Chuiliang from the University of Queensland: "Falun Gong must win." 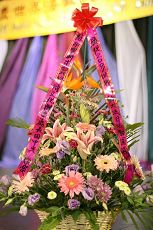 Mr. Tian Chungkuang, the chief of Commercial-Culture Office of Taipei in Brisbane sent flower to the celebration

Ms. Zhao Yan, a representative of the Falun Dafa Association of Queensland, thanked the guests for coming and introduced the history and background of Falun Gong.

Mr. Graham Quirk, Chief of the Transportation Department of Brisbane, thanked the practitioners for inviting him and said that he was eager to watch the performance.

Ms. Vicki Stokes, the representative of Mr. Andrew Bartlett, Parliament Member of the Australian Democrats in Queensland, expressed that MP Bartlett has always been supportive of Falun Gong. She also pointed out that it is not proper to ignore the human rights issue and do business with China.

Prof. Qiu Chuiliang from the University of Queensland pointed out that the Chinese Communist Party (CCP) is actually afraid of "Truthfulness-Compassion-Forbearance," the principles of Falun Gong. He said, "The Beijing government is afraid of Falun Gong, although it has military power."

Prof. Qiu took Wang Bo's case as an example to illustrate the CCP's fear of Falun Gong. The CCP held a trial of practitioner Wang Bo several weeks ago. At the trial, the CCP assigned 500 policemen to keep order, indicating that they have no confidence and are afraid of Falun Gong.

Prof Qiu said, "Falun Gong didn't give in to the CCP; instead, it spread throughout the world. I extend my congratulation to Falun Gong, and I also thank Mr. Li Hongzhi for bringing such a good belief system to the world. Falun Gong must win."

At the celebration, practitioners introduced the history and background of Falun Gong to the guests and shared their cultivation experiences.

Ms. Jenny Zhang, who just graduated from college, called upon guests to pay attention to the CCP's harvesting organs from living Falun Gong practitioners. She hoped that people can celebrate Falun Dafa Day in China in 2008.

Oliver, a Westerner who has cultivated Falun Gong for four years, said that he became more peaceful and healthier after he started practicing Falun Gong. He said that this practice is what he had been looking for his whole life.

Practitioners demonstrated their belief and spirit through music and dance. They called upon the guests to help to stop the eight-year long persecution.

After the performance, the practitioners served delicious food. The activity ended at 3:00 p.m.