At the end of the Eastern Han Dynasty, the land of China was divided into three nations: Wei, Shu, and Wu. The emperor of Shu nation, Liu Bei, left instructions in his will before he died asking Prime Minister Zhuge Liang to invade the North and revitalize the Han nation. 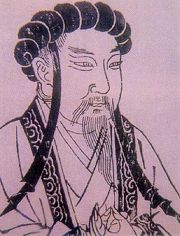 The portrait of Zhuge Liang

At that time, Meng Huo led the southern invaders to invade the Shu nation. Zhuge Liang immediately ordered the army to fight the invaders.

When the army arrived in the Southern territory and fought the army led by Meng Huo, Zhuge Liang used a strategy of making his army look defeated. Meng Huo led his army to chase Zhuge Liang. As a result they fell into the trap Zhuge had set. The southern invaders were defeated and Meng Huo was captured.

Meng Huo was taken to see Zhuge Liang. He thought to himself: I will certainly die this time. Surprisingly, Zhuge Liang ordered soldiers to untie the rope and kindly persuaded him to surrender. But Meng Huo was not convinced. He said, "Victory or defeat is usual in battle. I was not careful and fell into your trap. How can I be convinced?"

Zhuge Liang did not force him. Instead he took a walk around his army camps with Meng Huo. He then asked Meng Huo, "What do you think of my army?" Meng Huo said arrogantly, "I failed because I was not clear about the weaknesses of your army. After you showed me your army today, I have to say that it is not that impressive. It would not be that difficult to defeat you." Zhuge Liang laughed and said, "Since you think this way, then go back and prepare better next time. We will have another battle."

After his release, Meng Huo prepared his army and once again fought the Shu army. However, he was a person with courage but no wisdom. He was not nearly as competitive as Zhuge Liang. Once again he was captured. However, he still refused to surrender. Zhuge Liang once again released him.

The officials in the Shu nation were all puzzled. How could we let go of our enemy easily? Zhuge Liang had his own idea, "In order to have long-term stability of the southern border of Shu, the only way is to convince them with virtue and then they would be convinced from the bottom of their heart. Otherwise it would be troublesome in the future." All officials admired his insights.

When Meng Huo once again came back, his brother Meng You came up with an idea. At midnight, Meng You led an army to the Han Camp and pretended that they would surrender. Although knowing his true intention at first glance, Zhuge Liang treated his soldiers to a large amount of good wine. As a result, Meng You's soldiers were all drunk. At that time, Meng Huo led his army to strike but unexpectedly fell into the trap again. He was captured again. But he was still not convinced. Zhuge Liang then let him go for the third time.

Upon returning, Meng Huo prepared his army for another strike. One day, his spy suddenly reported to him, "Zhuge Liang is exploring the terrain all alone." Meng Huo was so excited and led his people to capture Zhuge Liang. However, he once again fell into the trap and was captured for the fourth time. Knowing that he would not be convinced this time, Zhuge Liang once again let him go.

One official of Meng Huo's army, Yang Feng, was very grateful for the generosity of Zhuge Liang. To return the favor, he and his wife captured Meng Huo after they made him drunk and took him to the Han Camp. Meng Huo was captured for the fifth time but he was still not convinced and said that he was framed by traitors. Zhuge Liang then let him go for the fifth time and asked him to fight again.

Upon returning, Meng Huo joined forces with General Mulu. The camp of General Mulu was extremely solitary. Leading his army, Zhuge Liang went through many difficulties to arrive there. However, the Southern army used wild animals to fight. As a result, the Han army was defeated. After they returned to the army camp, Zhuge Liang made fake animals that were several times larger than their real counterparts. When they fought again with the army of General Mulu, the real animals were frightened to see the fake animals. This time the Han army won and Meng Huo once again was captured. Although he was still not convinced, he did not have any reason. Zhuge Liang still let him go.

Meng Huo then joined forces with the Wuge nation. The king of Wuge nation had a brave army that was very good at fighting. They were equipped with light armor to prevent spears and swords getting through. Zhuge Liang prepared accordingly and won the battle by using fire as part of the strategy. Meng Huo was captured for the seventh time. He knelt down. Zhuge Liang ordered him untied and treated to wine and food.

Meng Huo was drinking with his brothers and wife when someone came and reported, "General Zhu ordered me to release you. You can prepare once again for the fight. Now you can leave."

Meng Huo shed tears and said, "It is unprecedented for someone who was captured seven times and released seven times. Although I come from a small country, I should also know the norm. How could I be this shameless?" He then led his people and knelt down. He apologized, "The general is powerful and mighty. We will no longer come back!" Zhuge Liang then invited Meng Huo to the banquet to celebrate. He returned all the invaded lands to Meng Huo. Meng Huo and his officials were all very grateful and left graciously. When he returned, he also convinced other tribes to surrender.

The officials asked Zhuge Liang, "Now that we finally conquered the South. Should we send our officials there to govern?"

Zhuge Liang said, "If we send our officials, we have to also have soldiers. It not only wastes manpower and army supplies, more importantly, it would cause distrust of each other. We let every tribe govern itself and we make peace with each of them. Isn't it better this way?" They were all convinced.

Zhuge Liang was ready to return to the Shu nation. Meng Huo led all of the officials and heads of all tribes to accompany him all the way to Yongchang. Zhuge Liang asked him to care for his people and go back. Meng Huo and others shed tears and said good-bye. Along his way, Zhuge Liang gave local farmers crop seeds and farm equipment. People in South were very grateful. They built temples and worshiped him as compassionate father. They also sent medicine, paint, cattle and horses.

Many years later, Zhuge Liang passed away. Emperor of Jin dynasty, Sima Yan, unified the three nations. The head of Shu nation Liu Chan was taken to Luoyang. Meng Huo was still grateful for the generosity of Zhuge Liang. Every summer he would lead his soldiers to Luoyang to visit Liu Chan. He also asked the emperor to kindly treat Liu Chan and his people. The emperor was also deeply moved.

Using his superior wisdom and tolerance, Zhuge Liang had captured and released Meng Huo seven times and eventually convinced him not to fight. We can see that throughout history, all wise people win support with kindness and generosity. One first has to be kind before doing anything. It is the same principle for officials. The priority is to establish their virtue. One needs to be righteous to govern the country and secure his people. One should be devoted and selfless. This is what people would appreciate and the whole world would be in peace. For those who took power through violence, they could never exist for long and will eventually be eliminated by history.

“In April 2007, Twenty-One Confirmed Deaths of Practitioners Due to Torture (Photos)”