(Clearwisdom.net) On April 14, 2007, Falun Gong's Divine Land Marching Band participated in the Picnic Festival Parade held on the campus of the University of California Davis and brought happiness to more than ten thousand people. 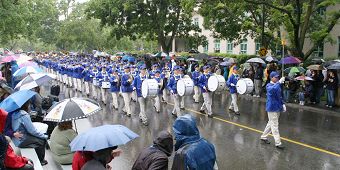 Although it was raining, many people came to watch the parade. The Divine Land Marching Band performed "Falun Dafa is Good", "Fa Rectifies the Universe" "America, the Beautiful" and other songs.

One local citizen said that he had heard about Falun Gong, and knew about the persecution in China. He was shocked by the CCP's harvesting organs from living Falun Gong practitioners.

Mary and her friends are from San Diego. They liked the band's performance. Mary said that the drum players were very impressive. She noticed that the members of the band are at different ages, but they cooperated very well.

Rosanne, the organizer of the parade, said that they welcomed Falun Gong practitioners and the band did an excellent job.

Many Chinese people watched the parade, too. They waved to practitioners and many of them took photos of the band.

The Picnic Festival has been held 93 times. It is the largest campus activity held by college students in America. About 100 groups attended the festival. Falun Gong practitioners have attended this festival every year, and have helped many people learn the truth.

“Mr. Qu Yanlai Sent to Tilanqiao Prison Hospital in Shanghai; His Life Is in Imminent Danger”