Heilongjiang Province Falun Dafa practitioner Liu Jingming worked at Qiqihar City Chinese Medicine Hospital. He was honored as an "outstanding" purchasing agent. On February 8, 2007, he was detained at Tailai Prison.

It took guards at Tailai Prison only 46 days to torture 39 year-old Mr. Liu to death. At 7 p.m. on March 24, 2007, guard Ji Hengtai of the Training Unit at Tailai Prison phoned Liu Jingming's home. He claimed that Mr. Liu died after "jumping out of the window of the building" at 1:40 a.m. on March 24. The CCP (Chinese Communist Party) has used this excuse for almost eight years when murdering practitioners.

Practitioner Liu Jingming was born on July 23, 1968. He worked at Qiqihar City Chinese Medicine Hospital and was considered an "outstanding" purchasing agent. He began to practice Falun Gong in 1995, and conducted himself according to the principles "Truthfulness, Compassion, Forbearance." He thought of others first before doing or saying anything. He was not corrupt or selfish when he worked as a purchasing agent. He treated people kindly, and was considered a good person recognized by all people in the hospital. His invention "two sticks" for the hospital's security department was patented by the Patent Office in 1995.

The hospitals suffered from severe water loss in 2001. Most of the taps leaked, and the hospital could not get it fixed after spending a great deal of money. Mr. Liu Jingming did not ask for a reward. He fixed all the taps in the hospital. The hospital staff no longer had problems with the water taps. The savings to the hospital amounted to many thousand yuan a year. The hospital emblem he engraved in 2002 during his spare time still hangs in the hospital office.

Sadly, such a kindhearted, compassionate and good person who lived by the principles "Truthfulness, Compassion, Forbearance" was imprisoned and taken to a forced labor camp. They extorted money, sentenced and murdered him after Falun Dafa was banned in 1999 by the CCP.

At 11 a.m. on March 25, some of Liu's family members went to Tailai Prison. Guard Ji Hengtai claimed that the guards at the prison "cared" for practitioners. When questioned the cause of Liu Jingming's death, Ji Hengtai said, "We carry out forced "transformation" of practitioners. Mr. Liu Jingming was 'very stubborn.' He would not recite prison rules, only his Teacher's articles. Mr. Liu Jingming chose death because he 'felt that the prison term was too long.'" Two employees of the Punishment Detection Section of County Public Security Bureau and Tailai Prison Procuratorate also claimed that the death was caused by despair over "the length of the prison term."

Family members, deeply grieved, asked indignantly, "Since Mr. Liu Jingming died at 1:40 a.m., why did the prison staff not notify the family until 7 p.m.? What did you do for those 18 hours? Can iron bars be so easily broken loose at the prison? Besides, Mr. Liu Jingming suffered high blood pressure, was tortured daily and was emaciated. Where did he get the strength to break open the iron bars? Mr. Liu Jingming's knees were purple black. There was blood and other marks on his knees. This was certainly caused by long term kneeling."

When the family members, with eyes filled with tears saw Mr. Liu Jingming's body, they were shocked. The body was horribly mangled. The right side of the head was caved in. The face and entire body was horribly damaged. The woolen sweater and pants he wore were soaked with blood, but his underwear and underpants did not show any bloodstains. Mr. Liu Jingming's elder sister said that this was not his underwear. The left leg showed signs of possible torture. The right leg had a hole, which was approximately 5 to 6 centimeters in diameter. The right leg was twisted and both knees were purple black and showed coagulated blood. 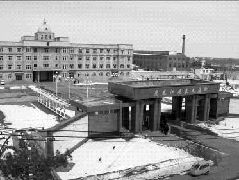 On the morning of April 1, Mr. Liu Jingming's family phoned Chief Ma of the prison politics section to advise him of their visit in the morning. The family members arrived at Tailai Prison at around 10 a.m. They phoned Chief Ma to advise of their arrival and were told to see Deputy Chief Mei Jiming. Mei Jiming was rude and unpleasant and not ready to talk to Mr. Liu's family. When they asked to speak to Chief Ma, they were told that he had left for Qiqihar. After some discussion, Mei Jiming, Training Unit guard Ji Hengtai and Chief Liang Fuwen took them to a meeting room.

That day, Training Unit guard Ji Hengtai claimed again that Mr. Liu Jingming "had jumped out of the window." He changed his March 25 statement. Now, inmate Zhou Lixin went into the room to grab Mr. Liu's right hand. Mr. Liu escaped and jumped out of the window. Inmate Zhou Lixin came into the room and tried to grab Mr. Liu's left hand. When corrected by Mr. Liu's family, he changed his story. When family members asked as to how they "transform" practitioners, Ji Hengtai changed what he had said on March 25 "We have orders from top level management to forcibly transform practitioners. Mr. Liu Jingming was very stubborn." He denied any wrongdoing or forced transformation. Ji Hengtai clearly did not tell the truth.

Family members asked, "On March 22, didn't you beat them when Mr. Liu Jingming, Mr. Ren Yingqun and two other practitioners stood up to expose lies?" Mei Jiming responded, "We never beat people." Family members then questioned the 6 centimeter hole on Mr. Liu Jingming's right leg. They refused to answer. But said that the procurator had inspected the injuries. Family members requested to see Ren Yingqun who had been imprisoned with Mr. Liu in the same cell, but were denied permission.

When family members asked how the prison management would deal with this matter, Mei Jiling said that Mr. Liu did not work, so it could not be treated as work injury. He again repeated that Mr. Liu had been killed when falling out of the window. Mr. Liu's family members responded that Mr. Liu died in the prison, so the prison should take responsibility. Then they requested that an autopsy be performed on Mr. Liu's body. They asked that the coroner provide the cause of death. They also requested that Mr. elderly parents receive financial compensation. Apparently, the Qiqihar City procurator Wang Liancheng was involved in "investigating" the case.

After Falun Gong was banned, slandered and persecuted in 1999, Mr. Liu went to appeal in Beijing, a right given to Chinese citizens by the Chinese Constitution. He wanted to explain that Falun Dafa was framed. He was taken back to his hometown and tortured with the "Big Hang Up" at Anshun Road Police Station. His wrists were injured. Staff from the Qiqihar City Longsha District CCP government and Qiqihar City Public Security Bureau extorted 8,000 yuan before releasing Mr. Liu after 18 days detention.

In February 2002, police from Zhengyang Police Station tried to force Mr. Liu to write a guarantee statement. To escape this persecution he left his home. On February 2, police of the Qingyun Street Police Station arrested him when he was distributing Falun Gong truth-clarification flyers with another practitioner. In the police station, police tortured him with "Big Hang Up," forced him to sit on the iron chair, brutal beatings and other tortures. He was transferred to the then No. 2 Detention Center, and sentenced to one and a half years at Fuyu Forced Labor Camp.

Around April 20, 2002, police of Fuyu Forced Labor Camp used handcuffs to hang up practitioners from 30 to more than 120 days. Police Huang Dianlin, Wang Quan, Tong Zhonghua tried all they could to stop practitioners to practice the exercises. They hung practitioners on the two meter high double bunk bed, and cuffed hands behind their backs, so the body had no room to move. They insulted practitioners with dirty language. They were hung up daily from ten to fifteen hours. They also curtailed bathroom visits. Due to long time hanging and standing, practitioners' legs and feet were very swollen and it became difficult to move. Practitioners who were hung up include, Fu Zhiyu, Zhou Shuyou, Luo Yongquan and Liu Jingming. Later, police cuffed both hands of Fu Zhiyu and others to a heater pipe, which was 20 centimeters off the ground. Due to torture, Fu Zhiyu died from a stroke not long after his handcuffs were removed.

After Mr. Liu was released from the forced labor camp, he was again arrested in the afternoon of March 30, 2006. He knew that the CCP minions would continue to arrest practitioners, so he visited practitioner Li Qi to warn him. Before seeing Mr. Li, he was arrested by police Gu and others from Shuguang Police Station in Tiefeng District.

Police from the Tiefeng vice squad tortured Mr. Liu with the iron chair for 11 days. They tortured him during interrogation. His mouth was injured. He was brutally beaten and hung up. Thenm, he was taken to Qiqihar No. 1 Detention Center.

In October 2006, Liu Jingming received a 12-year sentence. He appealed, but his appeal was not accepted. The person responsible for Mr. Liu's case was special case leader Ma Chongzhe of the Tiefeng Sub-bureau. Mr. Liu was taken to Tailai Prison on February 8, 2007. He and other practitioners suffered inhuman torture in the "Training Unit." They suffered brainwashing, were forced to recite prison rules, ordered to write guarantee statements, deprived of sleep, disallowed to talk, forbidden family visits, brutally beaten and tortured.

On March 22, the so called "tour lecture group" went to Tailai Prison to conduct a brainwashing session. Mr. Liu Jingming, Mr. Ren Yingqun and two other practitioners stood up to expose the lies. For this, they were tortured cruelly.

This argument is not acceptable. This is mere speculation. Even it was "suicide," it was caused by the guards' inhuman torture and forcible transformation of Mr. Liu. A national law enforcement unit may not torture detainees and force transformation. This violates "freedom of belief." This violates the tenants of the "Chinese Constitution" and existing "Criminal Law."

Tailai Prison staff and guard Ji Hengtai violated all the aforementioned rules and regulations. They can't escape from being charged with the death of Falun Gong practitioner Mr. Liu Jingming.

“Several Practitioners from Jilin, Shandong, Heilongjiang Provinces Died as a Result of Persecution”