On March 24, 2007, people from New York, Philadelphia, New Jersey and Washington D.C. held a rally on Capitol Hill in the nation's capital to support 20 million withdrawals from the Chinese Communist Party, Chinese Communist Youth League and Chinese Communist Young Pioneers. More than 10 Chinese and Westerners gave speeches, explaining why the CCP is about to crash and encouraging people to quit the party for their own safety.

Mr. Li Dayong, the spokesman from the Global Service Center for Quitting the Party, said that the root of the evil party has been pulled out, and it could crash at any moment. 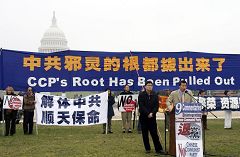 Mr. Li Dayong, the spokesman from the Global Service Center for Quitting the Party: The root of the evil party has been pulled out, and it could crash at any moment. 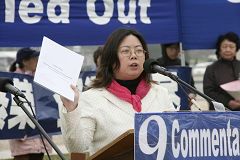 Ms. Wu, the representative from Coalition to Investigate the Persecution of Falun Gong, announces new evidence of the CCP's harvesting organs from living Falun Gong practitioners. 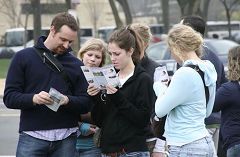 Ms. Wu, a representative of Coalition to Investigate the Persecution of Falun Gong, announced new evidence of the CCP's harvesting organs from living Falun Gong practitioners.

Ms. Wu said: "On February 12, 2007, the Coalition to Investigate the Persecution of Falun Gong (CIPFG) in Australia, Asia, Europe and America were established. Politicians, media and human rights organizations from different countries were concerned about and condemned the CCP's harvesting organs from living Falun Gong practitioners. Some politicians and international organizations suggested a boycott of the Beijing Olympics in 2008 if the CCP doesn't stop these atrocities."

The CIPFG announced: "The killing and harvesting of organs will not be happening in China simultaneously with the Olympics, which respects the basic human rights."

Dr. Terri Marsh, a human rights lawyer and the chair of the Human Rights Law Foundation, warned the media in China not to get involved in the persecution of Falun Gong.

On January 20, 2006, on behalf of five Falun Gong practitioners, Dr. Marsh filed a case against China Central Television (CCTV) for torture, genocide, and other crimes against humanity in the United States District Court, Southern District of New York states. CCTV has effectively created a network of lies about Falun Gong that encourages and incites the public, the police and other security forces in China to subject practitioners to unlawful arrests and detention, illegal police interrogation and torture, and brutal forms of brainwashing and indoctrination techniques to force practitioners to renounce their beliefs and associations, and in many cases, to cause the execution of practitioners who do not renounce Falun Gong. In the last two years, Mr. Marsh has collected a lot of evidence.

Ms. Marsh said that CCTV is alleged to have committed the very same crimes for which several Nazi war criminals were executed. Without the CCTV and other propagandists in China, the Jiang Zemin's, Lou Gan's and Li Lanqing's would have no one to follow their orders to eradicate Falun Gong and purge it from China.

She said that those who participate in the propaganda effort against Falun Gong will face serious legal sanctions - life in prison, lengthy jail terms if not death by execution. She pointed out that a defense that the defendants were just following orders of their superiors is invalid. The fact that any person acted pursuant to the order of his government or of his superior does not free him from responsibility for his crime.

Mr. Wei Jingsheng, the president of the Overseas Chinese Democracy Coalition, sent his support to the rally. Mr. Wei said: "Quitting the party really saves Chinese people's conscience and helps them to think about the CCP's crimes. It also helps Chinese people to get rid of their fear of the CCP. It makes them realize that the CCP is not equal to China."

Mr. Zhang Tianliang, a columnist for the Epoch Times, said that it is Gods' will that the CCP is about to crash down, and every member of the party is in danger. He asked: "If the CCP didn't have so many members, would it dare to do so many bad things and kill so many people?" He said that all members of the CCP help the CCP to commit crimes more or less, so if they don't quit the party, then they would share the blame for the CCP's crimes.

"Did you quit?" has become the new greeting in China

Mr. Zhang Hailian, a representative from the Service Center for Quitting the Party in Washington D.C., said: "In the last three months, the number of withdrawals from the party increased very fast, and the information regarding quitting the party has spread wider and wider in China. Since last December, there have been one million people publishing their announcement on the website. The number of withdrawals per day increased from 20~30 thousand to 30 ~ 40 thousand and the total number has reached 20 million."

A reporter interviewed a Chinese gentleman who is from Shanghai and doing business in America. The gentleman listened to all the speeches at the rally. He told the reporter that he learned about the movement of quitting the party on the internet when he was in China. He even received a fax regarding the Nine Commentaries on the Communist Party in his office. He said that many Chinese people know about it. He didn't expect to see the rally in America. He took photos of the rally and asked the Service Center for Quitting the Party for a copy of the Nine Commentaries and other information.

A college student from George Mason University said that he was glad he'd come to the rally. From the banners, he learned about the Nine Commentaries on the Communist Party and the movement of quitting the party. As a student majoring in international affairs, he expressed that he would study this issue.

“Germany: Helping the People of Bielefeld Know About the Persecution of Falun Gong (Photos)”