The Crimes Committed by the No. 4 Team of Jidong Prison in Tangshan City, Hebei Province Continue (Photo)

The No. 4 Team in Jidong Prison of Tangshan City, Hebei Province, is located in Zuidong, Luannan County. This is a place where Falun Dafa practitioners are detained. It was very difficult to transfer this message to the outside. One of the buildings in the prison is the hospital and it is specifically used to detain Falun Dafa practitioners.

Currently, there are several Falun Dafa practitioners detained there, and they are in critical condition. Falun Dafa practitioner Mr. Yang Jianbo is in a very dangerous situation. Eight prisoners divided into four teams are on duty in rotations in his room, plus three police guards outside. The prison doctor gave Mr. Yang an infusion and oxygen and also gave him an unknown injection. Whenever he gave him this kind of shot, Mr. Yang's body would tremble because of the extreme pain. The police determine whether Yang Jianbo still remains conscious using this means. They do not allow anyone to see Yang Jianbo. They said, "Our boss said they want this person; that's why we keep him alive. If they say we don't want him any more, we will unplug the oxygen..." 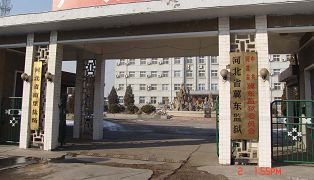 Police officers in the No. 4 Team of Jidong Prison:

The Persecution I was Subjected to in Jidong Prison

I have been illegally detained in the No. 2 Team of Jidong Prison, of Hebei Province, for three years. Since 2000, I have been detained by police in various criminal middle teams. One guard and two prisoners were assigned to closely watch me. Every word and movement, even my three meals a day were all recorded. Every week they did a thorough search through my cell, and took away every little piece of paper that had something I had written. They recorded everything and did a malicious psychological questionnaire to analyze my mind. They didn't allow other prisoners to talk to us, and didn't allow mention of Falun Gong. Because prisoners detained before 2000 had not heard the truth about Falun Gong, they all had hatred and fear towards us. For several years we were detained in different criminal middle teams. The practitioners detained in the prison could not contact each other, not to mention contacting the outside. When our families visited us, they arranged four to five police officers to watch and videotape us. Whatever our family brought to us they searched very thoroughly, in each and every corner of any clothes we received. The only message we could get was other practitioners' status from the prisoners who monitored us.

In 2001, in the No. 1 Team, a Falun Dafa practitioner passed one of Master's articles to another practitioner. He was reported and detained in a strict-administration team and was brutally tortured. He was not allowed to sleep for six days and nights. They hung him up by his handcuffs and whenever he closed his eyes they beat his ten fingers with a bamboo board. One blow would cause so much pain that his whole body would be covered with cold sweat. He was forced to stand outdoors and read slogans that slandered Master and Falun Dafa. When he refused to read them they beat him with a rubber baton and shocked him with an electric baton. His legs were so swollen that he could not even wear his shoes or cotton pants. He could only put on his thin sleeping pants, but he was forced to work outside in such a condition.

On one occasion, in the No. 11 Team, a practitioner started a hunger strike to protest the persecution. The police guard tied him to a chair for over twenty days and force-fed him every day. They didn't even remove the rubber feeding tube stuck into his nose. When this practitioner started his second hunger strike, the police tied him to the chair for over forty days, until he was in critical condition. Later, he was sent to the No. 4 Team, where the persecution continued.

In the No. 2 Team, the guard intentionally gave a little care, in living and work conditions, to those practitioners who had written the "four pledges" (similar to the three statements). To the practitioners who firmly practice Falun Dafa, they adopted persecution methods such as detaining them in confinement, brutally torturing them, and increasing their work intensity, so that we would generate all kinds of attachments, get divided, and be "transformed."

In 2001, after the Tiananmen Square staged self-immolation case was broadcast, the evil people in the No. 2 Team slandered Falun Dafa to a great extent and forced all prisoners to write articles slandering Falun Dafa. They also tried to force practitioners to write to their families about how Falun Dafa is not good, and not to listen, believe, or practice Falun Gong. A large number of prisoners committed crimes unintentionally. Over twenty Falun Dafa practitioners could not take the pressure any more and wrote the "four pledges."

In November 2002, the evil attempted to further poison us. After we had group Fa-study and discussion, based on new articles by Master and the situation of the practitioners outside of the prison, that other practitioners passed to us, we firmed up our confidence in cultivation. When the prison authorities made us do the thought report at the end of the brainwashing class, we denied the evil's arrangements and defeated their plan of 100% "transformation." The evil was very frightened and the brainwashing class was hastily ended as most of the practitioners became steadfast on the Fa.

Those who actively participated in the persecution:

“Mr. Yan Weihong Very Weak and in Critical Condition at Urumqi No. 5 Prison; His Wife Forced to Leave Town”