Mr. Wang Guolin, 79, was a Falun Gong practitioner from Jiamusi City. He started practicing Falun Gong in 1997. He benefited greatly, both in his physical health and his moral standard. Because of his practice of Falun Gong, Mr. Wang was harassed, illegally arrested, and subject to extortion by the Jiamusi City 610 Office and the Public Security Bureau. He passed away on November 25, 2006. 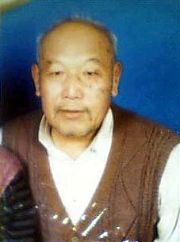 Below is a partial description of the persecution that Mr. Wang Guolin suffered prior to his death.

On the afternoon of July 24, 2000, police officers Mi Gang and Li, and another policeman from Yongan Police Branch of Jiamusi City's Qianjin Public Security Bureau knocked hard on the door of Wang Guolin's home. After Mr. Wang opened the door, the three policemen shouted, "Which one of you practices Falun Gong?" Wang Guolin and his wife, Ren Shuqin, replied, "We both practice."

The officers ransacked their home and arrested them. They also confiscated their Falun Gong books, audiotapes, photos, and truth-clarification materials.

At the police station, the policemen interrogated them and asked where they had obtained their Falun Gong materials. Mr. Wang and his wife did not reply, so they were tortured until midnight. Afterwards, the police transferred the elderly couple to the detention center. Policeman Mi Gang cursed them with vulgar language and shouted, "I will put you in the detention center and lock you up there until you are dead!"

In the detention center, Wang Guolin was detained for 16 days, and his wife was detained for 21 days. They both exhibited the symptoms of myocardial infarction and hypertension. Since they were on the verge of death, the police station had to release them after extorting bail of 1,000 yuan from their family.

In the summer of 2003, Mr. Wang was putting up Falun Gong truth-clarifying materials near the Yongan Police Station when seven officers came up and arrested him. At the police station they pressed him in the interrogation for the source of the Falun Gong materials until seven in the evening. The police also ransacked his home and confiscated an audiotape of Falun Gong lectures.

In the winter of 2004, someone knocked on Mr. Wang's door. It was the seven policemen who had come earlier to search their home. Mi Gang and another officer robbed them of their Falun Gong books. As they started to search his home, Wang Guolin stopped them. The police tried to arrest another Falun Gong practitioner who was there visiting. The visiting practitioner displayed severe symptoms of a heart attack, and his whole body twitched drastically, so the police did not arrest him. Chen Wanyou from the Jiamusi City Public Security Bureau learned about the situation over the phone and led three policemen to Wang Guolin's home with cameras. Chen Wanyou tried to take some photos, but Wang Guolin stopped him. They also tried to take Mr. Wang to the police station, but he said, "I did not violate any law and I won't go with you." The police left since they had no legitimate reason to arrest him.