Tainan is one of the oldest cities in Taiwan. It was established in 1661. People in Tainan have welcomed Falun Dafa. There are 24 exercise sites in Tainan, whose population is about 800,000. 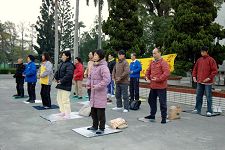 The exercise site at Tainan Agricultural 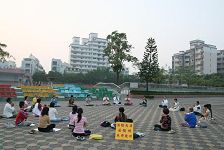 The exercise site at Yongkang 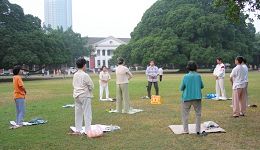 The exercise site on the campus of Cheng Kung University

The exercise site in Banyan Garden was set up in October 1999. Early on, there were only two practitioners. One of them was a student in Cheng Kung University and the other was a lady. They found that there were many tourists in the garden in the afternoon. To give chances to more people to learn about Falun Dafa, in March 2001 they decided to set up another exercise site in the afternoon. Many people learned the exercises at this site. The practitioners at this site are from various walks of life, including college students, PhD candidates, retirees, professors, businessmen and housewives, all of whom are benefiting from cultivation.

Practitioners set up the Falun Gong Association at Cheng Kung University in 2000. Students from Cheng Kung University often have group Fa-study and exercises. They also hold many activities on the campus to clarify the truth, such as freshmen parties and photo exhibitions. The teachers and students of CKU are very supportive because they know a lot about Falun Dafa and the persecution. In the winter of 2006, practitioners from CKU held the Sixth Camp for Collegiate Falun Dafa Practitioners. Practitioners in colleges from all over Taiwan got together, studied the Fa and shared their experiences in cultivation.

Practitioners at the Banyan Garden site get together and send forth righteous thoughts every Saturday and have done so since June 2001. They also have group Fa-study every weekend.

Most participants at this site are young people, including college professors, high school teachers, college students, police officers, retired workers, pharmacists, businessmen and housewives. They come to the site to do the exercises every day. 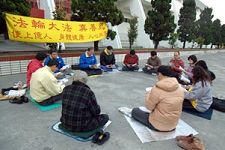 Mr. Yang, a member of the site, was in very poor health. The doctor said that his bones were as weak as those of a 70 year-old. He had to wear winter clothes in the fall and often went to the hospital. His wife also had sleeping problems. They saw many doctors and tried various treatment methods, but their situation got worse and worse. After practicing Falun Dafa, their problems disappeared.

Mrs. Chen has three daughters. They all had serious health problems. One day her daughter said to her, "Mom, did you realize that it's been a long time since we last went to the hospital?" Mrs. Chen then realized that Falun Gong had indeed cured them of their health problems.

This site was set up in August 2001. Practitioners come to do the exercise at 4:30 every day. They have done all five sets of exercises every day for the past five years. On the weekends, they study the Fa together after the exercises. One practitioner is a 72-year old lady who started practicing seven years ago. She was illiterate back then, but through studying the Fa every day, she was able to memorize the Fa and also clarify the truth on the Internet.

A young lady at this site had bone spurs, which caused many inconveniences for her. But after practicing Falun Gong for several months, the pain disappeared.

“Poland: Raising Awareness about the Persecution to People in Skierniewice and Warsaw (Photos)”