On December 2, 2007, the Global Service Center for Quitting the Party held a rally at Campsie Park, Sydney to support the 29 million withdrawals from the Chinese Communist Party (CCP). Many democracy organizations and local people attended the rally. The Divine Land Marching Band, Tongsong Choir and Minghui Dance Team were invited to perform at the rally. Organizers set up many display boards at the rally to expose the CCP's history, and many tourists were shocked by the CCP's brutality. 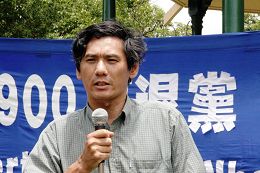 Mr. Zhang Xiaogang, council member of the Federation for a Democratic China, gives a speech 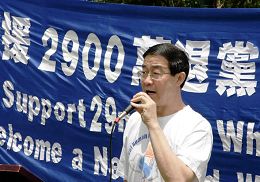 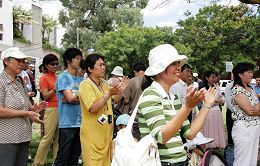 Mr. Lu Zhenlei, a representative from the Service Center for Quitting the Party in Australia, said that most people who read the Nine Commentaries on the Communist Party recognized the evil nature of the CCP and quit the Party. He thinks that the spread of this book will bring a bright future to China and the whole world. Mr. Lu also said, "Although the CCP is about to collapse, it won't change its brutal nature. It will bring disasters to China. We should give up any illusions we have about the CCP ever changing and completely renounce it. Many people of justice see the fact that the CCP is about to collapse, and they are standing up to call for all Chinese to quit the Party. More and more people, such as Gao Zhisheng, Wang Zhaojun, Zheng Cunzhu and Guo Quan, have stood up to expose the truth and called for an end to the persecution of Falun Gong. A peaceful era without the CCP is coming. Let's stop the CCP's brutality by severing all ties to it."

Mr. Yang Jun, a democracy movement activist, said in his speech: "The Olympics should not co-exist with the persecution of Falun Gong in China. Socrates said that people should respect gods. Besides respecting gods, people should also respect human rights. The CCP has lied about "serving people" for many years. It tries to keep its power through lies and violence. The attendees of the rally today are not afraid of the CCP's violence. We will eliminate the tyrannical power and welcome an era of respecting gods and human rights--an era without the CCP."

Mr. Zhang Xiaogang, council member of the Federation for a Democratic China (FDC), said: "The CCP tries to maintain its power by deceiving the public, but the Nine Commentaries on the Communist Party exposed the truth about the CCP. Another way that the CCP keeps its power is by using violence to intimidate people. But now 29 million Chinese people are not afraid of the CCP's violence and have quit the Party. The CCP is in a crisis. We hope that more people will step forward and expose the crimes committed by the CCP against themselves or someone they know. If everyone speaks out about the CCP's crimes, the CCP cannot keep its power for even one day."

Ms. Zeng, a local Chinese, said that the CCP tried to destroy traditional Chinese culture and has brought disasters to Chinese people constantly, so its tyrannical power should be ended now.

A Chinese tourist quit the party at the rally. He said that he read the Nine Commentaries on the Communist Party in China, and was glad to take this chance to quit the Party.

The Nine Commentaries on the Communist Party was published in November 2004. In the last three years, more than 29 million Chinese people recognized the evil nature of the CCP and quit the Party and its affiliates.