Florida: Mayor and City Council of the City of Plantation Declare December 27, 2007, as Holiday Wonders Day

Whereas, China once went by the name "Shen Zhou" or "The Land of the Divine" because the people of the time believed that Chinese culture was a gift from the heavens; and

Whereas, from imperial court protocols to fine arts, music, fashion, and science, all aspects of society were aligned with the divine order; and

Whereas, the Divine Performing Arts has become synonymous with Chinese classical dance and traditions of China's classical performing arts; and

Whereas, the Divine Performing Arts is reclaiming the long-lost treasures of China by presenting a series of traditional Chinese performances, transporting audiences around the world to a land of beauty and enchantment; and

Whereas, beginning in 2006, the Divine Performing Arts joined forces with New Tang Dynasty Television to produce the acclaimed Holiday Wonders and Chinese New Year Spectacular, themed "Myths and Legends"; and

Whereas, the evening will present a Chinese song and dance style show that captures the spirit of traditional culture with artistic styles from different dynasties and ethnic regions; and

Now, Therefore, Be It Resolved that I, Rae Carole Armstrong, Mayor, and the City Council of the City of Plantation, Florida, declare December 27, 2007 as:

In the City of Plantation and encourage all residents to attend this cultural presentation.

In witness whereof, I have hereunto set my hand and caused the Seal of the City of Plantation to be affixed this 17th day of December 2007. 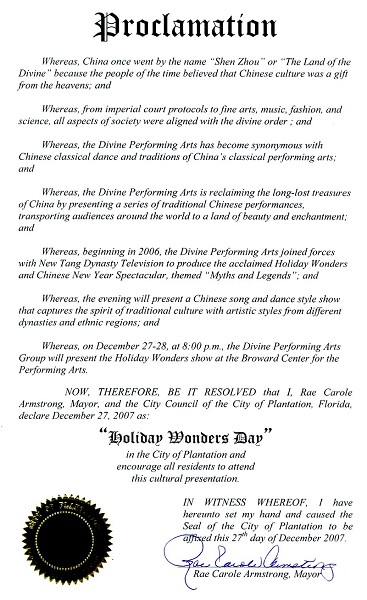