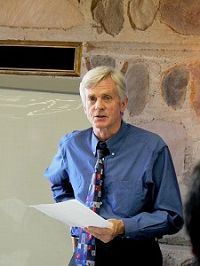 Regarding the letter, Mr. David Kilgour, former Parliament Member and former Canadian Secretary of State for Asia Pacific commented, "No elected official or other person should pay any attention to such pressure from Chinese party-state officials. Indeed, they should be told that in open societies such tactics are seen by most people as an abuse of diplomatic privilege, especially given the high artistic merit of the shows which will evidently be seen in about 62 cities across the world this season."

Mr. Kilgour said, "During 27 years in Canada's Parliament, I never encountered similar interference from any government except that of the one in Beijing. We have about 125 foreign missions in Ottawa."

Mr. Kilgour told a story, "While Deputy Speaker of our House of Commons, a representative of the Chinese embassy even telephoned my home, urging me not to visit Taiwan. His arguments were not persuasive and I visited Taiwan without negative consequences."

Before the 2007 NTDTV Chinese New Year Spectacular, some Canadian politicians also received letters from the Chinese Embassy in Canada, in which the Chinese officials asked them not to support the shows. But the shows were very successful in Canada. The Prime Minister sent a congratulation letter. Congressman John Baird went to the show on behalf of the Prime Minister and Canadian government. Six city council members of Ottawa went to the show to congratulate it.