Mom, When Will You Return Home Safely? (Photo)

On the evening of December 15, 2006, as usual, I called my parents in Beijing from my home in Los Angeles. To my surprise, my father told me in tears, "Your mother was arrested again." At 8:00 p.m. on December 15, three policemen from the Shuangyushu Police Station in Beijing broke into their home. They ransacked the place and found some Falun Gong materials. Then they arrested my 64-year-old mother.

This is the second time my mother was illegally arrested since the Chinese Communist Party (CCP) started persecuting Falun Gong in 1999. The first time was right before the 2000 Chinese Near Year. Mom was sentenced to three years in prison. Ever since she was released in 2003 she has been watched and harassed by the police.

After 2006, the CCP started "preparing" for the Beijing Olympics Games in 2008. They ransacked many homes in Beijing and arrested Falun Gong practitioners. Mother's arrest was part of this recent campaign. 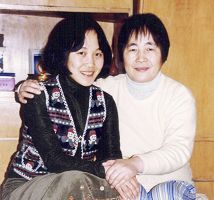 Mother and I Start Our Falun Dafa Cultivation Paths

My mother is a Falun Dafa practitioner. Her name is Mrs. Li Shuying. She was a teacher at Zhongguancun High School in the Haidian District in Beijing before she retired. She was a very kind and capable person even before she practiced Falun Gong, and had received many "Excellent Teacher" awards from her school.

In 1995, mother's colleague told her about Falun Gong. Shortly after, Mother took Father and me to her colleague's home to watch the nine-day Fa lecture videos by Teacher Li Hongzhi. When I heard Teacher say, "This characteristic, Zhen-Shan-Ren (Truthfulness-Benevolence-Forbearance) is the criterion for measuring good and bad in the universe," I realized that this was what I had been seeking my whole life. I started cultivation practice with my mother. Mother got up at 5 every morning to do the one hour sitting meditation. After that, she prepared breakfast for Father and me, then rushed to school to start her first class at 7:00 a.m.

Mother was well liked by her students. When she reached retirement age in early 1998, the principal of her school asked her to stay for another semester, until summer. Thinking that a cultivator should always think of others, Mother agreed to stay and also took on the responsibility of mentoring two young teachers. It was Falun Dafa that gave her the wisdom and strength to do this. Though she was nearly 60, she often thought of interesting approaches and examples during her lectures, which made the otherwise dry Physics class come to life for her students.

After a busy day of working at school and at home, Mother spent all her spare time doing the exercises and reading Teacher's books. She participated in group study with other Falun Gong practitioners who lived in the South Section of the Zhongguancun neighborhood. Most of the time, they met at a practitioner's home or a conference room in the Institute of Computing Science, the Chinese Academy of Sciences. Practitioners gathered to discuss how to raise one's xinxing and to strictly live by the standards of "Truthfulness, Benevolence, Forbearance." I also attended a few small Fa conferences with mother and listened to fellow practitioners sharing their cultivation experiences and understandings.

Mother introduced Falun Dafa to many friends and relatives. She also obtained permission from her school to play the nine-day Fa Lecture videos. All of this was done voluntary. Not only Mother, but also other practitioners spent their spare time showing the videos and teaching the exercises to newcomers. Eventually, these activities were used as "evidence" by the CCP that they were "sabotaging legal law enforcement by organizing and using a heretical [slanderous term omitted]."

My mother was first arrested on February 4, 2000. She was held in the Haidian District Detention Center for more than a month without any official notification. Only after my father went to the police department did they issue an arrest warrant. Mother was later transferred to the Seventh Division of the Beijing Police Department. A few months later, she was taken to the Xicheng District Detention Center. My father and many relatives worked to obtain her release. Mother's school was also willing to bail her out. However, father was never allowed to see her. Instead, he was berated and threatened by the police.

After Mother's arrest, the police ransacked my parents' home. They stole Dafa books and a computer. They claimed that the computer was the "tool" mother used to "collaborate with overseas forces." My father endured great pain during this time. He is a very honest and nice person, but when he was nearly 70, his family was torn apart, his home was ransacked, and the CCP's Legal Newspaper called our home the center of illegal activities.

Father does not practice Falun Gong, but he has never been against mother practicing. Sometimes he would ask mother to read to him the short articles that Teacher Li writes (referred to as "scriptures" by disciples). Father completely agrees with Teacher's teaching about being a good person and cultivating one's xinxing. But he does not believe the supernormal achievements one can gain from practicing qigong. However, even after experiencing the disaster of the persecution, Father has never blamed the troubles on Mother's practicing Falun Gong. When some relatives suggested that he write a guarantee statement that would get mother released from jail, he refused. He believes that it is not wrong at all for Mother to have her beliefs; rather, it is the government's persecuting good people that is wrong. He has seen the healthy and positive environment in our home that developed after Mother and I began practicing Falun Gong. Mother used to dominate our home, but she became very easygoing after she started cultivating. However, Father, who used to be quiet, started to display a bad temper and would shout at Mother over tiny issues. Mother always resolved these issues with a smile. That is my mother and our wonderful home.

On February 3, 2003, after being imprisoned for three years, Mother was released. From the photos that Father emailed me, I saw that her hair had turned white. However, a cultivator has a diamond-hard belief. When she returned home, police from the Shuangyushu Police Station often "visited" her and asked her to hand in "reports on her thoughts" periodically.

After Mother was arrested again at the end of 2006, Father was not allowed to visit her. A month later, he received a one-page notice informing him that she had been sentenced to two and a half years of forced labor. The notice said that we had 60 days to appeal. When Father went to the Beijing City Government to hand in a reconsideration appeal for Mother, his appeal was rejected because Mother had not been authorized it. However, since Father was never allowed to see her, he could never get the authorization. This is an example of how the CCP's laws are twisted to take advantage of citizens.

Later, Father told me that Mother was imprisoned in the Tuanhe Dispatch Center in the Daxing District in Beijing for about four months. The living conditions there were so poor that several people shared one quilt in the winter. After she was sentenced to forced labor, she was moved to Beijing City Women's Forced Labor Camp. There, Father was allowed to visit her once a month. The forced labor camp has 10 divisions, and each division holds 50 to 100 people. A division consists of several units, each of which holds about 12. Most people imprisoned there are Falun Gong practitioners, and many are like my mother, over 60 of age. The forced labor camp uses paramilitary management. People sleep on bunks. Only a short time is given for washing and using the toilet. The inmates are forced to work more than 10 hours a day to plant vegetables, pick peanuts for export, pack sugar produced from sugar cane, and so on. After a long day's work, many of the older practitioners are so exhausted that they can't even climb up to their bunks.

Since phone conversations with my father are monitored and his visits to Mother are also monitored, we three cannot talk to each other freely. Consequently, I still don't know many details about what my mother experienced in the labor camp. Father said that the guards forced her to take medicine that lowers blood pressure even though they knew that she didn't have high blood pressure. Also, all practitioners are pressured to sign a statement guaranteeing that they will not practice Falun Gong any more. Practitioners were not allowed to eat or sleep until they sign the statement.

The CCP wants to destroy healthy people and harmonious families and keep them from practicing Falun Gong. It does not allow people to have their own thoughts. It thinks it can control everyone and do whatever it wants to them. However, the universe has its own rules, which do not change based on what humans want. "Heaven will eliminate the CCP" is a bomb that started ticking the moment the CCP decided to persecute Falun Gong.