The Malaysia Bar Association, NGOs (Non-governmental organizations), and the general public gathered at the Malaysia Bar Association to celebrate International Human Rights Day on December 10. This year's theme was, "As I Believe: Freedom of Expression through Art, Music, Culture, and Conscience." Falun Gong was again invited to participate. Practitioners exposed information regarding the inhumane treatment and persecution of Falun Gong in China. Also represented was the initiator of the Global Human Rights Torch Relay -- the Coalition to Investigate the Persecution of Falun Gong (CIPFG). The CIPFG called on people to support the Torch Relay, and to refuse having the Olympic Games turn into the "Bloody Olympics," a tool for the Chinese Communist regime to implement dictatorship and suppression. After learning about the Torch Relay, many people gave their signature of support, and said that they would participate in the Human Rights Torch activities next year. 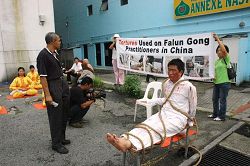 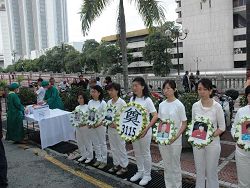 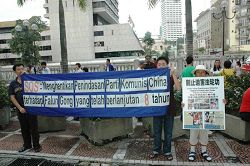 Practitioners call out, "End the persecution of Falun Gong" 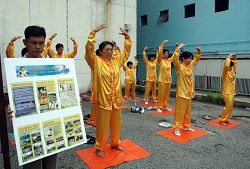 Practitioners demonstrate the exercises to the public 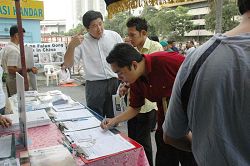 People sign a petition supporting an end to the persecution 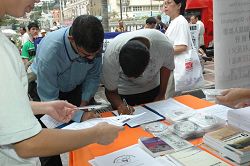 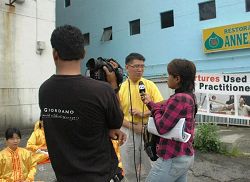 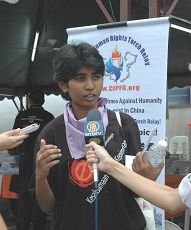 At the event, Falun Gong practitioners displayed banners, display boards, and staged exercise and anti-torture demonstrations. Some practitioners held wreaths to commemorate the victims of the Chinese Communist regime. People were deeply absorbed by the displays, asked about the Chinese Communist regime's persecution of Falun Gong, and signed a petition in support of an end to the persecution. Media from many regions and foreign countries filmed these moving scenes. One media organization, NTV7, conducted an interview with Falun Gong practitioners Mr. Lin and Ms. Huang, in order to understand more about the persecution.

In an interview with the media, Bar Council Human Rights Committee chairperson, lawyer Edmund Bon said, "In recent years, Falun Gong practitioners have been criticized, stripped of their human rights, and persecuted. However, since the initiation of the Human Rights Torch campaign, we have seen the people who stand by human rights and practitioners of Falun Gong receive support from all around the world. As the chairperson of the human rights committee, I deeply believe in freedom of speech, freedom of belief, and I will support anti-torture calls. Whether you are Asian, Malaysian, Indian or African, I think the importance is in the message you want to spread, it is important to persist with this spirit."

Sonia Randhawa, Deputy President of the World Association of Community Radio Broadcasters, expressed her thoughts regarding the Human Rights Torch Relay. "Keeping a watch on the voice of human rights in China and the need for freedom of speech is very important. Today, the difficulty which confronts media is that they (the Chinese Communist regime) are trying to establish policies and statutes to restrict reports on the Olympic Games."

The representative from Empower Malaysia said that she had heard of the information regarding the live organ harvesting of Falun Gong practitioners. "I think everyone should sign the petition to stop this persecution. How can you allow this kind of thing to happen?! When the Human Rights Torch reaches Malaysia, our community should participate to show our support."