Chuchian, Taiwan: "Windy City" Is Bathed in the Light of the "Truthfulness-Compassion-Forbearance" Art Exhibition (Photos)

The "Truthfulness-Compassion-Forbearance" International Art Exhibition opened on November 3, 2007 at the Performing Arts Hall in Hsinchu, Taiwan. The exhibition will be open to the public from November 2 to 8, 2007. The international art exhibition has toured more than 40 countries including Europe, Asia, Australia, the U.S.A. and Canada. Over a hundred exhibitions have been held. The opening ceremony for the exhibition in Hsinchu had invited dignitaries from both the county and city government, who expressed their appreciation for Falun Gong's principles of "Truthfulness-Compassion-Forbearance." 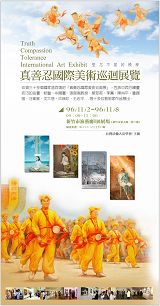 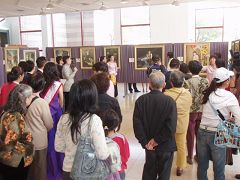 The Divine Land Marching Band performed at the opening ceremony to thunderous applause from the audience. The waist drummers in golden costumes also performed and the audience was inspired by their high spirits and cheerfulness. A lovely performance presented by children from "DouDou Kindergarten" brought the cheerful atmosphere to a peak. 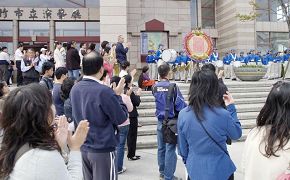 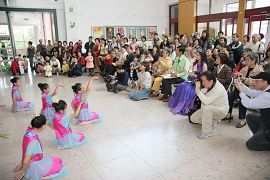 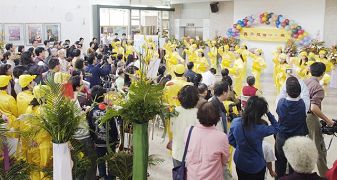 Refreshing Exhibition at the Cultural Center

Hsin-chu, also known as "Chuchian," is located in a trumpet-shaped valley with an opening to the sea. This special topography causes seasonal winds to blow all year round, so Hsin-chu is also called "Windy City". It is also a city where talents gather, and it is a melting pot for multi-ethnic groups. Chuchian is known as the cultural center of North Taiwan.

The Truthfulness-Compassion-Forbearance Art Exhibition encompasses the essence of traditional art of both the East and the West, and features sculpture, oil paintings and traditional Chinese paintings created by accomplished artists. These artworks portray the pursuit of truth in life, praise for gods and battles between good and evil. The artworks also depict the ongoing catastrophe taking place in the human world, that is, the persecution of Falun Gong initiated by Jiang's regime - the battle of good and evil.

Tseng Ming-ching, President of the Deren Lion Association, which helped host the exhibition, said that the Lion Association mainly aims to support people who need urgent help, and helps people in poor living conditions. The society does not host many art exhibitions of such a high-level that enable people to improve spiritually, morally and culturally. The association hopes to jointly host similar events in the future.

The hostess of the art exhibition, Ms. Jou Yi-Shiou, an art teacher, said that the Truthfulness-Compassion-Forbearance Art Exhibition showcases the realm of Falun Dafa, and all the exhibited artworks are the creations of Falun Dafa practitioners. The great deeds of Falun Dafa practitioners around the world who have worked together against the persecution, have caused a sensation in heaven and earth. The art exhibition records practitioners' great deeds over the past eight years of the persecution. Ms. Jou said that she hoped to call on people's conscience and sense of justice, and share the brilliance and goodness of Falun Dafa to the world's people. She also hoped that those who have participated in the persecution in China will stop before it is too late, and that they will no longer commit any more crimes.

Mr. Chen Sheng-lung, Secretary of the County Council Speaker said that the children's exquisite performance was amazing, that the paintings in the Truthfulness-Compassion-Forbearance International Art Exhibition were impressive and showed consummate skill. He said, "The sincerity embodied in the art exhibition touched us. We hope to contribute our efforts to support Falun Gong."

Ms. Chen Hsiu-chen, Section Head of the Bureau of Cultural Affairs and also a representative of the Hsinchu County Magistrate, said that Falun Gong cultivation practice has had a great impact. She said "It is admirable to pursue the spirit of Truthfulness-Compassion-Forbearance. Cultivating Dafa not only purifies one's mind, but also changes people from being selfish to becoming altruistic and selfless." She said she hoped that Falun Gong would continue to flourish.

Mr. Yao Ke-wu, Director of the Hsinchu Bureau of Health, visited the art exhibition and said that he believed that Falun Gong's spirit was well represented in Taiwan.

Professor Chang Chin-hua from the Institute of Journalism at the National Taiwan University spoke on behalf of the Falun Dafa Association. She said that they hoped to expose the Chinese Communist Party's (CCP) brutal persecution through the exhibition of the artists' works, and she also hoped that everyone could work together to stop the persecution. Professor Chang said that the CCP not only persecutes Falun Gong, it is also responsible for tainted food and products, corruption and dictatorship. She stated that the CCP regime is unworthy of its power. She hoped that people will stand up and bravely tell everybody about the persecution and abuse of power in mainland China.

An older woman in her 70s who lives near the cultural center walked into the art exhibition hall. She told the practitioner who acted as a guide to the exhibition that she thought that it was very meaningful to hold such an art exhibition, particularly in today's society where the standard of morality has fallen so much. She said that these kinds of events should be held more often, so that people will learn about the CCP's persecution. She said that although she could not read, she could understand the paintings. She was moved by the paintings and understood what they wanted to express.

Near the art exhibition hall is the library of the Bureau of Cultural Affairs. A woman who visited the library walked into the art exhibition hall. She said she was an atheist, but when she saw the painting, "Justice," she was suddenly awakened, and understood that no matter whether deities are from the East or the West, they all have the same principle that good people will be rewarded, and bad people will meet with retribution. Through the painting, she understood that gods are protecting kind people without distinction of national boundaries. 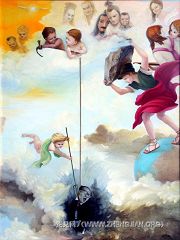 In the painting "Justice," little angels hang Jiang with a long rope and send Jiang down to Hell. Jiang is the chief culprit in the persecution of Falun Gong that has persisted for eight years. As of today, at least 3,100 Falun Gong practitioners have died as a result of the brutal persecution in China.

Many visitors said that they had thought that the Chinese Communist Party had become good with the development of its economy, and that the persecution reflected from these paintings was something that had only happened in earlier times. The practitioner who showed the visitors the paintings told them that even as they were talking, the persecution was still going on. They explained that the paintings show only a tiny portion of what is actually happening in China. The visitors were shocked and thought it unbelievable that the persecution still continues. The practitioners told visitors that the purpose of holding the art exhibition was to tell the world's people that there is still such a brutal thing happening in the world. The CCP has been covering up the truth about the persecution, and even harvesting organs from living Falun Gong practitioners for profit. After listening to the practitioner's explanation, exhibition visitors expressed thanks for learning the truth.

Ms. Wu walked into the art exhibition hall with her one-year-old child. Ms. Cai who was a guide explained that all the artworks were the creations of artists who practice Falun Gong and that their works express the beauty that they have experienced through their cultivation practice. She said that some of the works also express the artists' personal experience or the experiences of other practitioners amidst the cruel persecution in China. Ms. Cai also told Ms. Wu about her own positive changes, both physically and mentally, that she experienced after practicing Falun Gong. After listening to Ms. Cai, Ms. Wu said that she wanted to learn Falun Gong and asked for information about a practice site near her home. She said she would buy the Falun Dafa books. She also said that she had been searching for a cultivation practice recently, in order to achieve physical and mental wellbeing. When she heard that Falun Gong is simple and easy to learn, yet also very powerful, she decided to learn it. 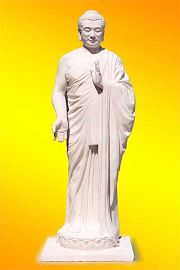 Sculpture "Buddha": The artist, Professor Zhang Kunlun said, "I did not believe in gods, because I had been brainwashed with the atheistic education in mainland China. My student's elder brother suffered from a disease that no hospital across China could cure. No less than 30 days after he began practicing Falun Gong, he became a completely healthy person. There are numerous similar miracles in Falun Gong. I truly feel that gods and Buddhas are in front of me. So I made the sculpture in the image of the Buddha whom I revere."

A couple finished watching performances, and then the man looked at the sculpture entitled, "Buddha" attentively for a long time. The guide told him how Falun Gong has been brutally persecuted by the CCP, and how Falun Dafa has been spread throughout the world and warmly received by people from over 80 countries. He said he had learned about the persecution, and he had read Zhuan Falun, but he did not practice the exercises, and had not truly entered the cultivation. Today, after seeing the sculpture, he was deeply moved, and he thought he should start cultivation practice. Later, the man said he would bring his fiancee's mother to see the art exhibition the next day.

These works convey good messages and inform people about the persecution of Falun Gong. Visitors were deeply moved. Just as the artists stated, "We are all Falun Dafa cultivators, our inspirations stem from our cultivation practice. We would like to share with the audience the beauty we have experienced in Falun Dafa through our artworks. We also want to display the brutal persecution of Falun Gong as committed by the CCP. In particular, we want to portray Falun Gong practitioners' uncompromising courage and lofty realm in the face of the persecution. We also wanted to use traditional painting skills to help people return to their normal form of conduct and orthodox belief through traditional art forms."