(Clearwisdom.net) On November 4, 2007, the welfare office of the British Cambridge Student Union organized "The Big Chill" event in the King's College again. The purpose of the activity was to give the students a break from studying and help them to get a broader understanding of the community. Because Falun Gong practitioners received wide acclaim at a similar event in March of last year, the event organizers invited them to participate again. 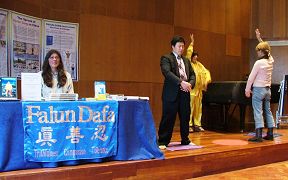 The event was held in two adjacent halls. In the first hall there were booths full of different foods. The second hall had four booths: the traditional Chinese Medicine booth located on the right hand side, followed by the Chinese language booth, British natural therapy booth, and the Falun Gong practitioners' booth.

During the event, a Chinese girl saw a group of people peacefully practicing the Falun Gong exercises. She was shocked, because they were practicing something that is banned in China. She thought this should be immediately reported, so she found the organizers of the event and reported the situation. Her actions were a jolt to the organizers and helped them to understand the depths of the CCP's brainwashing of the Chinese people.

In the second exhibition hall, the host of the natural therapy booth was drawn by the practitioners' music and exercise demonstration. She asked to learn and spent half the time in the practitioners' booth. During a break, people from all four booths practiced the Falun Gong exercises together.