(Clearwisdom.net) Human rights violations in China are drawing more attention in Washington D.C. as the 2008 Olympics approach. On October 27, 2007, U.S. Congressmen, human rights lawyers, representatives from Amnesty International, and representatives from the Romanian and Vietnamese communities held a rally in front of Capitol Hill to support the Human Rights Torch Relay. 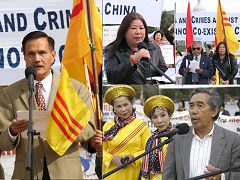 Representatives from Vietnamese, Burmese and Laos communities speak at the rally

The Human Rights Torch Relay is organized by the Coalition to Investigate the Persecution of Falun Gong (CIPFG), which pointed out that the Olympics and crimes against humanity should not co-exist in China. The purpose of the torch relay is to call upon the international community to pay more attention to human rights violations in China, including the persecution of Falun Gong.

One hundred people from different communities attended the rally. They held banners in different languages, which passed the same information to the public: "Olympics and crimes against humanity should not co-exist in China," and "No human rights; No Olympics." 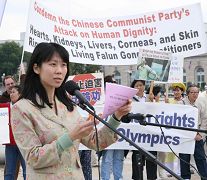 26-year old Wang Xiaodan came to the rally from Texas. She told the public about her father Wang Zhiwen's experiences of being persecuted as a Falun Gong practitioner. On July 20, 1999, Wang Zhiwen was arrested. Wang Xiaodan has not seen him since. 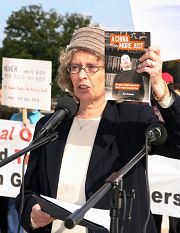 Terri Marsh, a human rights lawyer from Washington, D.C., has been collecting evidence of the persecution of Falun Gong. She said at the rally that the Communist Party's harvesting organs from living Falun Gong practitioners truly exists. She also called upon the international community to pay more attention to Mr. Gao Zhisheng, a Chinese human rights lawyer who has conducted intensive investigation on the persecution of Falun Gong and exposed the evidence to the public. 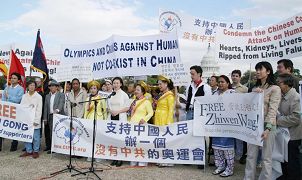 Elijah Cummings, a U.S. congressman from Maryland, and non-government organizations wrote supporting letters to the rally.

Tan Van Nguyen, chair of the Asian Democracy Association, said that the persecution of Falun Gong by the Communist Party is against the Olympic spirit. He called upon leaders and people in the free world to exert more pressure on the Chinese Communist regime and pass the message on to them: "No human rights, No Olympics."

“The Persecution of Group 5 in Shijiazhuang Forced Labor Camp”