The Yunlin County government gathered the best parade groups in Yunlin to launch the National Day celebration in the evening on October 10, 2007. The float of the Agriculture Bureau led the parade. The Falun Dafa Divine Land Marching Band of 250 people was the grand finale of the parade. The whole procession was several kilometers long. It was a magnificent sight. Parade groups stopped at several places along the route to give performances. Crowds of people came out to watch the parade. 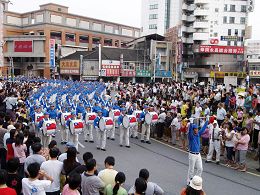 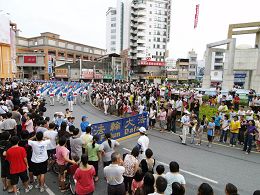 The grand sight becomes the focus of attention 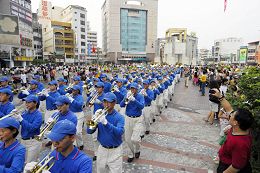 The Divine Land Marching Band was one of the most eye-catching and beautiful processions in the parade. 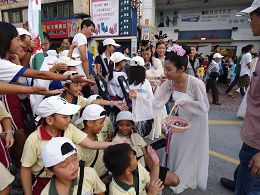 Spectators eagerly reach for lotuses and bookmarks with Dafa-introduction information from a "celestial maiden." 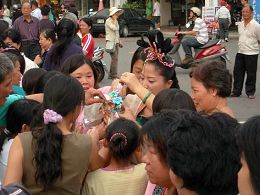 Spectators eagerly reach for lotuses and bookmarks with Dafa-introduction information from a "celestial maiden."

The Falun Gong Divine Land Marching Band was one of the most popular among the parade groups. With 250 band members, it showed tremendous momentum, played exciting music and looked exquisite. When the band passed spectators, they said, "Wow! How ceremonious!" Some said, "I have never seen such a large performing group at a parade. It is heart-shaking!" Many children shouted, "Pretty!" when they saw the woman Falun Gong practitioner dressed as a celestial maiden. Children eagerly reached out to get the lotuses and bookmarks with Falun Dafa-introduction information. Spectators gave the procession thumbs-up and praised them. Some called to their family and friends to come over to watch the band. They showed great excitement.

Mr. Chen, who is in charge of a newspaper, said the Falun Gong Divine Land Marching Band was the best. The alignment was perfect and magnificent. It was the most outstanding procession. Six college students from University of Science and Technology of Yunlin praised the great momentum of the band. They all said it was the most attractive. Some people wanted to learn Falun Gong. Ms. Li said when the band passed her, her heart was moved. Crowds of people filled the sidewalks along the parade route. Some people came all the way from Taipei. Some followed the parade. Some showed up early to wait in the park for the parade to start. The parade concluded perfectly with the Divine Land Marching Band.

“New Zealand: Falun Gong Practitioners Clarify the Truth during the Visit of a Chinese Navy Ship”