On December 24, 2006, the 47th Christmas Gala in Los Angeles County was held at the Music Center. Falun Gong practitioners from Los Angeles attended and performed the dance "Pure Lotus Flower." The practitioners also introduced Falun Dafa and clarified the truth about the persecution of Falun Gong in China to the audience. More than four thousand people attended the gala event and hundreds of thousands watched on TV. 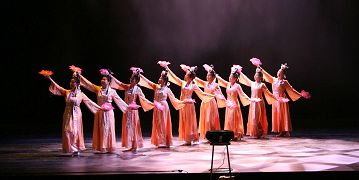 "Pure Lotus Flower" dance brings the beauty of Falun Dafa to the audience.

The Music Center was built in 1964. Since then, the Dorothy Chandler Pavilion Theatre has held the Christmas Gala every year. More than 1000 people perform in this, the biggest gala in the Los Angeles area. KCET TV station shows it live and PBS also broadcasts the best parts of it.

Before the gala, the organizer interviewed Falun Gong practitioners. Practitioners related that Falun Gong teaches the principle of "Truthfulness-Compassion-Forbearance". They also talked about the persecution that two performers had experienced in China. During the interview, practitioners explained that the pure lotus flower is a symbol of Falun Gong practitioners' spirit, with which they keep clarifying the truth to the public and spreading the principle of "Truthfulness-Compassion-Forbearance". The interview was made into a short video and shown to the audience before the performance. The audience was deeply touched by it. After the video, nine practitioners danced to the beautiful music and brought the beauty of Falun Dafa to everyone.