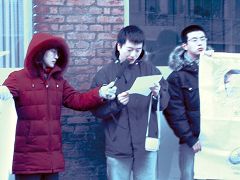 These six Falun Gong practitioners were unreasonably charged by the Singaporean police with "assembly without a permit" for their distribution of flyers in downtown Singapore to expose the Chinese Communist regime’s persecution of Falun Gong and to support the Chinese people withdrawing from the Chinese Communist Party (CCP) and its affiliated organizations. The trial was first scheduled to be held on January 22, 2007, in Courtroom 35, which is the smallest one with only eight seats. The court did not allow any spectators, including the practitioners' relatives, friends or journalists to be present at the court, with the excuse that there were too few seats. With these six practitioners’ protest and the help by other practitioners around the world, the covert trial was postponed to January 24, and the venue was changed to the more spacious Courtroom 16.

The Singaporean government has often boasted that Singapore is a democratic state, but the legality of this trial and the groundless charge to please the CCP regime are doubtful. The government also clearly knows that what they have done in this case will definitely be criticized by people around the globe. It is lamentable that Singapore’s leadership, simply for trivial short-term interest, is oppressing its innocent civilians and the six Falun Gong practitioners staging a peaceful protest against the persecution. It is a shame on Singapore’s history that the government has not dealt with this case from the standpoint of justice and conscience.

The Singaporean Consul, who is of Danish descent, has had friendly meetings with Falun Gong practitioners a couple of times in the past. But this time he avoided meeting the practitioners and asked his secretary to deal with them.

It is a fact that Falun Gong is being cruelly persecuted by the Chinese Communist regime in China. This is known to people from all walks of life and is widely reported by the media around the world. Several renowned international human right organizations, such as Amnesty International, Human Rights Watch, and various other human rights organizations under the United Nations, have focused their attention on the persecution against Falun Gong in China, and have released many articles to condemn the Chinese Communist regime’s persecution of human rights. Although Falun Gong has suffered such cruel tribulations, the number of practitioners has been increasing steadily. Currently, Falun Gong is popular in over eighty countries around the world. In stark contrast, the leadership of the Singaporean government has failed to acknowledge the historic trend. As a matter of fact, the withdrawal of 17 million people from the CCP and its affiliated organizations has clearly indicated to the people of the world that the CCP is on the verge of collapse.

Danish Falun Gong practitioners expressed their wish that the Singaporean authorities will stop this unlawful suppression. To be responsible to the nation and its people, the government should uphold justice and support human rights, and help to put an end to the Chinese Communist regime’s persecution against Falun Gong practitioners as soon as possible.

“Three Practitioners from Yibin City, Sichuan Province Died as a Result of Persecution”