The parades on Martin Luther King Day and Thanksgiving are the two biggest in Houston. 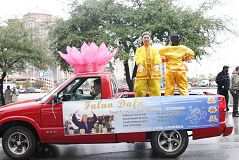 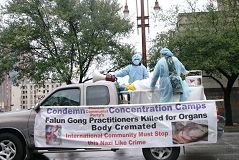 About 140 groups attended the Martin Luther King Day parade this year, including Falun Gong, NTDTV and other media, schools, companies and public service organizations. The parade started at 10 o'clock in the morning. 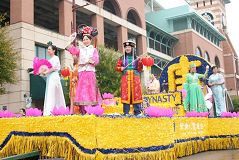 The media, which reported the parade, and the spectators took a lot of photos and videos of the floats of practitioners and NTDTV.

It started to rain soon after the parade began. After the parade, a Minghui reporter interviewed Mrs. Liao, who re-enacted the organ harvesting in the parade. When asked how she felt about the rain. Mrs. Liao said: "The rain didn't bother me. When I was lying there, I wanted to cry, because I was thinking of Falun Gong practitioners in China, who were killed for their organs. The CCP is really brutal. I really wanted to expose this and clarify the truth to the public."

Background of the Organ Harvesting

In March 2006, the CCP's harvesting of organs from living Falun Gong practitioners was exposed. A witness testified that her husband, who used to work in a hospital in Shenyang, had harvested corneas from 2000 Falun Gong practitioners, who were all killed afterwards. The CCP kept silent for three weeks until they eliminated all the evidence. Then a spokesman of the Foreign Affair Department denied the allegation.

As the evidence of organ harvesting increases, Coalitions to Investigate the Persecution of Falun Gong in China (CIPFG) were set up in Australia, Asia, Europe, North America. These groups planned to conduct unrestrained open investigations in China. The Chinese government feels more and more pressure from the international community. On November 18, 2006, the CCP admitted in its own media--China Daily--that most organs used for organ transplantations are from death-row criminals. By saying this, the CCP tried to cover up their crimes of harvesting organs from living Falun Gong practitioners.

After a two-month investigation, on July 6, 2006, Mr. David Kilgour, former Canadian Secretary of State (Asia-Pacific) and Member of Parliament, and Mr. David Matas, a renowned human rights lawyer, concluded that the allegations the CCP's was harvesting organs from living Falun Gong practitioners were true.

Mr. Kilgour and Mr. Matas were invited to give speeches and introduce the results of their investigation in more than 30 countries. They called upon international community to pay attention to this issue. During an interview in Ottawa, Mr. Kilgour stated that they had obtained new evidence of the CCP's harvesting organs.