The 21st New Year's Day Parade in London was held on January 1, 2007. Falun Gong practitioners were invited to participate in the festivities. Setting off from Parliament Square at 12 o'clock noon, the parade passed by Whitehall, Trafalgar Square, Regent Street, and Piccadilly Circus and ended at Berkeley Street. More than ten thousand performers representing 20 countries from around the world participated the parade. A half million spectators lined the parade route. 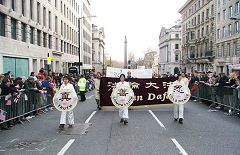 In the very front of the Falun Gong section, three Chinese characters in purple and edged with gold representing, "Truthfulness, Compassion, Tolerance," clearly showed Falun Gong's cultivation principles. They were immediately followed by a big banner with the words, "Falun Dafa" in Chinese and English. 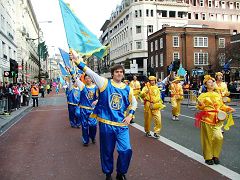 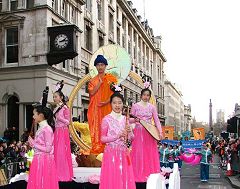 Right after the float was the Fan Dance performed by female Falun Gong practitioners in beautiful, traditional Chinese dress. Accompanied by the music of "Falun Dafa Is Good," they danced gracefully along the road. The spectators were impressed with the delicate movements of the Chinese traditional Fan Dance. 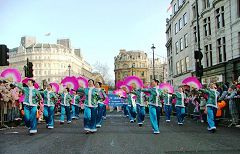 Behind the Fan Dance came the banner phalanx. The banners and scrolls delivered important information to people, including, "Falun Gong has spread to more than eighty countries worldwide," and, "More than a hundred million people have benefited physically and mentally from Falun Gong." 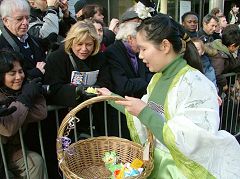 Along the parade route, practitioners gave the spectators a New Year's gift -- an exquisite lotus flower. Introductory information about Falun Gong was printed on bookmarks attached to every lotus flower, so that more people will understand the truth of Falun Gong.