On September 10, 2006, practitioners from Colorado and Kansas joined practitioners in New Mexico for the "Historical/Hysterical" parade in Santa Fe, New Mexico. The parade is a major event in the annual Santa Fe Fiesta. 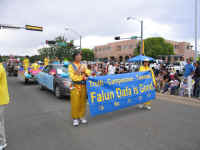 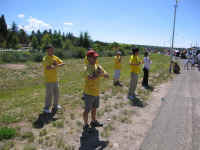 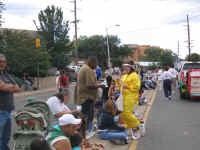 Commemorating the return of the Spanish colonists, the Santa Fe Fiesta is the oldest continuous community celebration in the United States. Since 1712, the people of Santa Fe have taken pride in both the historical and religious significance of the Santa Fe Fiesta.

On a warm Sunday afternoon, the atmosphere was filled with joy as the parade was about to begin. As the Falun Gong float approached, the crowd was awe-struck. Many smiled, cheered, or bowed in respect to the practitioners. Many people gratefully accepted flyers. By the time the parade ended, the practitioners found they had distributed about 2,000 flyers. Only one day later, a local practitioner received an email from a person who had received a flyer at the parade and wished to learn the practice.