(Clearwisdom.net) Before the end of Hamburg Summit, the European Falun Gong practitioners held a parade to support more than 13 million people withdrawing from the Chinese Communist Party (CCP) on September 15, 2006. At noon, an enormous and powerful parade headed by the waist drum team unfolded banners including, "No Communist Party Can Have a New China", "Free Gao Zhisheng," etc. From the Hamburg rail station, the parade crossed the busy Moenckebergstrasse and Jungfernstieg in front of the city hall, and proceded to the famous Gaensemarkt, finally arriving at the Hamburg Business Association behind the city hall. During the process of the parade, both passersby and people in the stores all watched in droves. The reporter randomly interviewed several viewers. 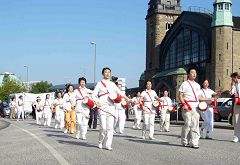 Markus is a student whose subject is Chinese. He had studied Chinese in Chengdu City, Sichuan Province in China for almost two years. This young German man from Berlin is attracted to traditional Chinese culture, and he took many pictures when seeing the waist drum troupe. The issue of the persecution against Falun Gong by the CCP was not listed in this Summit’s official topics. When the reporter asked Markus’s viewpoint, he said, "The China human rights issue is actually continuously mentioned. I think appealing to people’s attention in public is nonetheless helpful to improve Chinese human rights."Interview Original Voice (German): markus.mp3 (249KB)

A sixty-seven-year-old woman said, "I come from the ex east Germany and I know what the Communist Party is. It’s really, really horrible." She approved of the parade's support of withdrawals from the Chinese Communist Party to expose the CCP, and thinks that the German female prime minister had a very good opportunity to raise the human rights issue publicly and directly to the Chinese leader, "She must insist on raising this question." Interview Original Voice (German): alte Frau.mp3 (350KB)

A westerner in the parade procession used the microphone to answer many questions, "We all know there are at least two thousand concentration camps and labor camps in China. People there are enslaved. But you may not realize that this March we learned that many Falun Gong practitioners as well as dissidents, in many concentration camps in China, had their organs taken out according to the needs of the regime while they were still alive. Young and vigorous lives are seen as living organ banks. They can cut up the chest and abdominal cavities and dissect the victim at any time."On-the-Spot Recording:lautsprecherm.p3 (974KB)

The Hamburg Summit’s advertisements were pasted in every big and small underground station in the city. Most citizens were interested in the temple fair which was contingently established. As one gentle middle-aged woman was entering a clinic, she turned around upon hearing the waist drums, and then looked in the direction of the drumbeats. Upon seeing the banner, she knitted her brows and said, "Originally I planned to see a doctor and then go to the Chinese temple fair, but now I’m really surprised. This parade is really powerful, very strong power. I will first read the materials they distributed. I didn’t think the situation there was so terrible. I think it is necessary for people to be concerned about this matter. Didn’t we ourselves experience a similar event in the past? I was a child at that time, but nowadays this kind of thing is still happening in the world. This is really incredible."

A decent older man told the reporter, "Obviously, a big problem indeed exists in China. To strengthen the peaceful connection, friendly relations as well as economy is naturally a good thing, but these things that have been publicly exposed (such as the persecution against Falun Gong) definitely are wrong, and must be changed. This can not be tolerated. In fact, not only Germany but all of Europe should condemn this behavior." Interview Original Voice (German): kritik.mp3 (450KB).