Sydney, Australia: A Local Church Stands Up Against the Persecution (Photo)

(Clearwisdom.net) On Sunday, September 10, 2006, church members of a Greek Orthodox Church in Sydney came out of their church service and found a table with fliers exposing the Chinese Communist Party (CCP) crime of harvesting organs from living Falun Gong practitioners. On the table was also a stack of signature collection forms to be sent to the Australian Prime Minister. Greek Australians surrounded the table to sign their names, calling on the Australian government to help stop the CCP atrocity. 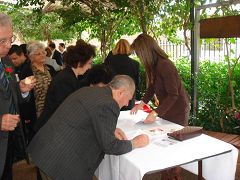 Father John met two local Falun Gong practitioners a few weeks ago, who told him about the brutal persecution of Falun Gong by the CCP since July 1999, especially about the atrocity of harvesting organs from living Falun Gong practitioners. Father John was shocked. He asked immediately, "It has been a long time. What are you doing? What have you done? You should have put together a committee to ask help from communities, organizations and governments."

Father John planned to write to the Prime Minister and tell his church members about the cruel persecution and call for signatures. On the first weekend of September, Father John asked church members to sit down after the service and told them about the tragedy of innocent Falun Gong practitioners in China, and about the signature collection. Many in the congregation asked where to sign as soon as they came out of the door. After signing and getting a flier, they patted practitioners' shoulders and gave them thumbs-up, "You did great! Hold on!"

One of them said, "I have heard about the organ-harvesting. It is horrible! I have called the Chinese Embassy to ask them." Councilman George's wife said, "You did the right thing! You should ask for support from charitable organizations like churches. My husband is a city councilman. He supports you." Mr. George came over and shook hands with the practitioners. He had heard about the organ-harvesting, and was surprised and pleased that the priest of his church raised this issue today. He shook hands again before he left and said he would like to talk more with practitioners later. An elderly gentleman told the practitioners with a smile that his church stressed peace, love and family values. The CCP's persecution of innocent people was against their faith, so they were against the persecution.

About ninety people signed on the open letter, which was sent to the Prime Minister and Councilmen.

The open letter from Father John:

I learn that several witnesses, including an investigative journalist and a veteran military doctor, have revealed that Falun Gong practitioners are being held in at least 36 concentration camps in China where they are routinely subjected to the forced removal of their organs, often while still alive, which are then sold at a huge profit for transplants. The bodies are quickly cremated to destroy all evidence.

I am glad to know that the Vice-President of the European Parliament Mr. Edward McMillan-Scott and former Canadian Cabinet Minister Mr David Kilgour has visited Australia this month to meet with many politicians and media and introduced their recent findings about organ harvesting from living Falun Gong practitioners in China.

In the "Report into Allegations of Organ Harvesting of Falun Gong Practitioners in China" recently published by Mr David Kilgour and a Canadian human rights lawyer Mr David Matas, they said that "We believe that there has been and continues today to be large-scale organ seizures from unwilling Falun Gong practitioners… The allegations, if true, would represent a grotesque form of evil which, despite all the depravations humanity has seen, would be new to this planet." (Report can be viewed at: http://investigation.go.saveinter.net/).

If I have a relative or friend in China that have been treated unjustly, I would be more moved to speak out. But as a human being, all these people are human beings like me, and I speak out strongly on their behalf. The Lord told to us have compassion on others, especially in the time of need. And so while these people in China are being mistreated, being unjustly imprisoned, being tortured, and being used as a means of providing organs for transplantation against their will, I need to speak out from my heart as a human being, a Christian, and a free citizen of Australia.

I appreciate all efforts that you and our government have made trying to help improve human rights situation in China and I strongly hope you could take further steps, especially regarding this urgent issue of organ harvesting without consent. Therefore, I would like to ask you, our Prime Minister John Howard to ask the government of China to open the doors of all concentration camps, forced labour camps, hospitals, prisons and detention centres throughout China in order to allow independent teams to investigate the charges of illegal detention, torture and live organ removal for transplants. And unless an independent investigation is made, the communists in China will continue with their mistreatment and violence towards these innocent people. So I speak out that the freedom will come not only to the practitioners of Falun Gong in China but to all people in China that they may be able to practice whatever religious belief that they have and to practice whatever exercises they would like to perform. They are not a threat to the society or the world in general and they deserve to live in peace.

I am also aware of Australian residents’ family members in China who are illegally detained and persecuted in China for practicing Falun Gong, e.g. Sydney resident Li Ying’s brother, Li Liang is being detained in Division 3 of Tianjin Shuangkou Forced Labour Camp, China since October 2004. He has been detained for long periods in different camps since 1999. His family are not allowed to visit or talk to him after May and they are all worried about his safety and life.

I can understand that how much worry can be with their families in Australia. So I also plead to you, our Prime Minister to request the Chinese government to immediately release Australians’ family members and other illegally detained Falun Gong practitioners on no conditions because they did no harm to other people and society. Thank you.