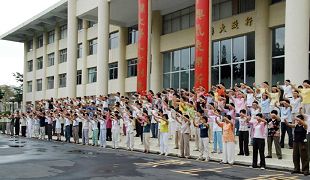 To create a stable cultivation environment in Taiwan, the Taiwan Falun Dafa Association held a three-day and two-night Fa study and experience sharing activity for assistants from practice sites in Taiwan on July 7-9, 2006 at Chung Hsing University. Nearly two hundred practitioners from across Taiwan got together to share their cultivation experiences, cultivation process and stories of looking inward, how they encourage each other and improve together, and do well in the three things, including studying the Fa, sending forth righteous thoughts and clarifying the truth.

Group Fa study and group practice are forms of Dafa cultivation that Master left for us. At the practice site, when encountering problems, we can discuss together to solve these problems. Many practitioners in Taiwan took the path of cultivation after July 20, 1999 when the Chinese Communist Party (CCP) and Jiang's regime started the persecution of Falun Dafa. Upon entering cultivation practice, they also entered the period of Fa-rectification cultivation. Many Fa-study and experience sharing in many areas became work reports or work teams recruiting helpers, but they seldom talked about the process of looking inward and digging out the roots of attachments and their understanding on the Fa, and neglected the problems in cultivation.

Master spoke to the assistants from Taiwan during the Canada Fa Conference in May, 2006. He pointed out problems that occurred among practitioners in Taiwan, including the attachment to political parties, problems of cooperation and coordination as a whole, squandering of resources, disliking and avoidance of face-to-face truth clarification, being unwilling to talk about problems in cultivation to save face, and so on. After returning to Taiwan, the assistants shared with practitioners in different places, acknowledged their faults, and talked about their experiences, including their understanding of attachments to political parties, so as to melt the partitions between practitioners.

At the experience sharing activity in July, practitioners shared many stories in passing tests while harmonizing their families. One practitioner said that her husband and children all cultivate in Falun Dafa, so other people admire them and thought that they may have less conflicts. But she said that when they encountered conflicts, they would naturally use Fa principles to require the other party to correct themselves, but did not require this of themselves. For example, both her husband and she participated in many Dafa work projects, and both felt their own projects very important or urgent, so both were busy with Dafa work. Then who would do household chores? Who would cook, do the washing, and mopping the floor. Neither of them would concede. At this time, she saw her deeply-hidden selfish heart, only thinking of quickly doing her own things well, but not thinking of her husband and children. She realized that her husband after all has to do all his Dafa work quickly, and he is not lazy. If she could share more household chores, her husband would have sufficient time to get his work done.

A practitioner who has been doing truth clarification through making phone calls to mainland China shared her experience of passing the test of sickness karma. Over the course of about a one-month test of sickness karma, she found her attachment to listening to words of praise, slacking off and indulging in Korean TV soap operas, and not doing well in the three things, due to her pursuit of comfort. This led to her being taken advantage of by the old forces. While in the trial, she realized that the old forces attempted to drag down Dafa disciples while looking at us covetously. Therefore, she completely negated the old forces' arrangement, and was determined to walk the path Master has arranged for her. She insisted on going to join group Fa study and experience sharing and group practice by taxi (originally by motorcycle) when she was in poor physical condition, until she passed the test.

A couple in their 70s in remote Hsin Chu County realized the importance and urgency of clarifying the truth and rescuing sentient beings. They took the initiative to ask to learn how to clarify the truth on the Internet, and frequently ask what else they can do. The husband was very attentive in learning how to use computer, and would keep asking if he encountered any problem until he solved them. The wife learned to clarify the truth by making phone calls to the mainland. In the beginning, she was afraid of picking up the phone and did not know what to say, but now she can help the Chinese people learn about the truth and quit the CCP.

At the same time, some practitioners mentioned that some assistants were not kind in their tone when talking to elderly practitioners, and did not consider if the time is appropriate to say what they wanted to say. This may make the elderly practitioners feel hurt in their hearts, resulting in a negative effect. Practitioners had a lively discussion on this topic and realized that we should be considerate of others at all times, always considering if what we say will hurt others, and if others can accept it. We should have more communication with practitioners to get things across clearly.

Principal Chen from Pingdong said that he attended a group Fa study and experience sharing activity five years ago organized by the Falun Dafa Association at Taipei's Military Museum. He felt hurt when the team leader shared his understanding, apparently saying that what the practitioners did in Pingdong was not a Fa-rectification work project. Later, Mr. Chen left in tears. From then on, he thought that his understanding of the Fa was right, and that the Falun Dafa Association was wrong. He no longer participated in any activities organized by the association and practice site. Though he was informed about the activities, and he also informed practitioners in the practice site to go to participate, he always added, "I won't attend." Therefore, only one or two practitioners went to take part in the activities. Sometimes he did take part in the larger activities, but they would organize a different group, wearing aboriginal costumes and singing their own songs, isolating themselves from the big group.

An assistant said when she saw the Fa-study announcement saying, "to encourage practitioners to talk more of the process and stories in looking inward during the sharing," she felt that it has been too long since they had such sharing. It seemed that they went back to the kind of Fa-study they had before the persecution started in 1999. Everybody talked about their understanding and stories of passing tests in their everyday life. This is truly solid cultivation.

After two days of Fa-study and sharing in small groups, there was a big group sharing on Sunday afternoon.

An assistant talked about how she passed the illness karma test. When encountering the sickness karma test, she thought about where the problem was in herself. One day, she thought of issues concerning funds. She has been good at using funds that practitioners voluntarily donated. Once, when making flyers for a certain activity, she had incorrectly written a guest's title. When a practitioner pointed it out, her human attachment came out, thinking, I can reprint these with the money I have at my discretion. She continued, "But I did not think that it was also the resources of Dafa, and I should not squander or waste it. I didn't even think of using the least amount of resources to correct this mistake, for example, using a sticker to cover over the place where I made the mistake. If I did it this way, I wouldn't need to reprint all the flyers." When she realized this, she saw the tumor in her reproductive system seeping pus and blood. After the bleeding stopped, the tumor seemed to no longer be there. The next day, she had completely recovered.

Another practitioner shared that he realized that the attachment to the blue and green political parties is not a case in which just the practitioners who are attached to this blue-green sentiment have a problem; it is instead a problem for the entire cultivation environment. One should be willing to look within whenever encountering anything, dig out one's deeply-rooted attachment and eliminate it, cultivate one's compassion, clarify the truth face to face to save sentient beings, and live up to revered Master's expectations of us.

The two-and-a-half-day Fa-study and experience sharing concluded successfully with everybody's active sharing of their own understandings and looking within. All attendees wanted to do their duty well as assistants, be responsible to Dafa, fellow practitioners and themselves. Together with all practitioners, we are creating a stable cultivation environment and are striving forward diligently on the path to Consummation.

“Germany: Falun Gong Practitioners Call on Singapore Government to Not Assist the CCP in Doing Evil”