A Photo Reminds Me of Another Sad Story (Photo)

(Clearwisdom.net) I was deeply moved by a photo taken on July 20, 2006, when overseas Falun Gong practitioners rallied on Capitol Hill in Washington D.C. In the photo, an elderly practitioner held a board with Huhu’s picture on it. Huhu is the son of a practitioner couple that is still being detained. This photo reminded me of another story, a story that is filled with bitterness and reveals the brutality of the Chinese Communist Party (CCP). 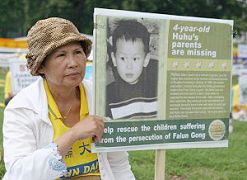 Practitioner holding a board with a photo of a child whose parents have been imprisoned, protesting the persecution of Falun Gong over the past seven years

Qingyang City, Gansu Province is the hometown of Dafa practitioner Cao Dong, who was secretly abducted after meeting with Mr. Edward McMillan-Scott, Vice President of the European Parliament, on May 21, 2006. At present, Cao Dong’s elderly parents are still living there with his young sister who is only in elementary school.

Cao Dong’s parents are kindhearted people. Their son Cao Dong is a bright and well-mannered young man. He once attended Beijing Foreign Language Institute majoring in French Literature. The elderly couple used to have a daughter. However, unfortunately, their lovely daughter passed away years ago because of illness. The couple was grief-stricken. In order to reduce their sorrow, they adopted a little girl and gave all their love to this child, Cao Dong’s little sister.

Cao Dong, who lives in Beijing, is the spiritual support of his parents. After practicing Falun Gong, Cao Dong’s eye problem disappeared, which was a great comfort for his parents.

However, after the persecution began in July 1999, like numerous other practitioners, Cao Dong was also subject to brutal persecution. He was once jailed in Inner Mongolia Drug Rehabilitation Center for clarifying the truth to the government and local people. On October 1, 2000, Cao Dong, who then worked as a tour guide, led his French clients to the airport. But he was harassed by the police. The local police and public security police asked his boss about his work situation and told his boss that Cao Dong could not work on jobs involving foreign visitors. Under pressure, Cao Dong’s boss had to fire him. As a result, Cao Dong had to constantly move from place to place to avoid further persecution.

On the night of November 20, 2000, Cao Dong was illegally arrested. Along with 20 other practitioners, he was interrogated and later transferred to other detention centers. In March 2001, the Beijing Court held an illegal trial of these practitioners. Cao Dong was sentenced to 4 years and 6 months, and sent to a prison in Gansu Province.

During the four-and-a-half years, Cao Dong’s parents felt their whole life had collapsed. Moreover, Cao Dong’s wife Yang Xiaojing was also persecuted and jailed. The persecution of their son and daughter-in-law was a heavy blow to the couple. Cao Dong’s father contracted a severe heart problem. Cao Dong’s mother had to look after her sick husband and young daughter. The whole family was struggling.

On May 21, 2006, Cao Dong met with Mr. Edward McMillan-Scott, Vice President of the European Parliament. During the meeting, Cao Dong talked about the persecution he and his wife suffered. Cao Dong especially mentioned that when he once saw the body of a practitioner he knew very well, he noticed the body had holes in it and some of the organs were removed. On the same day of the interview with Mr. McMillan-Scott, the CCP abducted Cao Dong. On the night of May 26, the police ransacked his home, looted cash and other personal belongings and arrested Gao Feng, a friend who was living in his home at that time. The police threatened and interrogated Gao Feng. Later Gao Feng was released.

After Cao Dong’s arrest, none of his friends and relatives wanted to break the news to his parents, fearing his illness-stricken father could not endure such a blow. However, the Beijing National Security Brigade managed to obtain the elderly couple’s telephone number and threatened Cao Dong’s friends not to get involved in this matter.

I wonder how Cao Dong’s parents and young sister are going to pull through the ordeal?

I feel sad for the evildoers who follow the CCP. They don’t know that they will have to pay for all the evil deeds they have done. We sincerely hope they can wake up and quit the CCP.

“Over 20 Dafa Practitioners on Hunger Strike at Changlinzi Labor Camp”