A Necklace Stained by Torture with Tears of Blood (Photos)

(Clearwisdom.net) This is the necklace woven by Ms. Sun Yan, a Falun Gong practitioner from Dalian City, while she was being detained at Longshan Detention Center. She wove this necklace with compassion to be given as a gift to her fellow practitioner, Ms. Gao Rongrong. 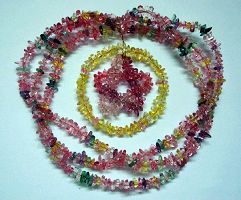 Ms. Gao Rongrong has passed away, but Ms. Sun Yan is still detained and persecuted at Masanjia Prison in Shenyang City. Seven years since the start of the persecution, we mourn for all practitioners who have lost their lives under the persecution and call for an end to the illegal detention of Falun Gong practitioners in all forced labor camps and prisons.

At the end of 2003 to early 2004, Ms. Sun and Ms. Gao were detained together in Longshan Detention Center in Shenyang City. Upon arriving at the detention center, Ms. Gao suffered severe physical torture and mental persecution, which included brainwashing. She was deprived of sleep and suffered corporal punishment. Ms. Gao got quite weak and became absentminded. Taking advantage of her poor condition, the evil people tried to force her to give up her belief in Falun Gong. They moved her to a cell on the first floor where Ms. Sun was detained. At that time, many of those who had been "transformed" surrounded Ms. Sun to try to force her to betray Falun Dafa. Although surrounded by evil, Ms. Sun found many opportunities to share her understanding of the Fa with Ms. Gao. During the struggle between the righteous and the evil, Ms. Gao stayed quietly aside, becoming more firm with her belief as the days passed. In the following days, with support from each other, the two ladies walked together through countless tribulations with "Truth-Compassion-Tolerance" in their hearts.

Soon, the team heads, Wang Jinghui and Tang Yubo, found out that Ms Sun and Ms. Gao had become quite close. They immediately brought Ms. Sun to the workshop on the third floor and forced her to work like a slave by making crafts with very cheap plastic pieces. There, people had to perform heavy labor over 18 hours per day. The extreme labor caused the workers’ hands to deform and the skin on their hands to peel off repeatedly. Ms. Gao worried about Ms. Sun’s health and felt great pain seeing her suffer. One day, on the way to the cafeteria, Ms. Gao saw that Ms. Sun was leaving. When they passed by each other, Ms. Sun swiftly snuck something into Ms. Gao’s hand, the necklace that she had woven. She smiled to Ms. Gao who could tell how pure and firm Ms. Sun’s heart was.

Afterwards, the policemen, Tang Yubo and Wang Jinghui, tried to force Ms. Gao to go to the third floor and do slave labor when she was so weak that she couldn’t stand up straight. Ms. Gao firmly resisted the persecution. Policeman Tang Yubao stomped his feet with fury and threatened her. He told another detainee to carry her to the workshop, but Ms. Gao still refused to do the labor.

Whenever they were together, Ms. Gao and Ms. Sun would use the time to share their understandings of the Fa. They encouraged each other to strengthen their faith, and sent rare copies of Teacher’s lectures to each other. Policewomen Wang Jinghui, Wang Chenmei, and Ma Zaiming, of the Second Division, always stood in front of the window on the second floor to monitor the practitioners when they were lining up in the yard. They would shout out loudly whenever they found Ms. Gao and Ms. Sun standing together, "They are together again! Separate them!"

Before the 2004 Chinese New Year, practitioner Yi Shujie from Shenyang City and two others were forcibly sent to Masanjia Detention Center. Policeman Tang Yubao threatened the other practitioners, "See, three of them were sentenced to Dabai Prison. I will also see to it if any of you dare not to follow orders!" The Second Division even held a convention to slander Falun Gong. When Ms. Gao refused to attend the convention, policeman Tang Yubao rushed into her cell and dragged her, barefoot, down from the upper bunk, and, while holding her neck, he beat and kicked her while dragging her to the convention.

Seeing what was happening to Ms. Gao, Ms. Sun rushed in and tried to stop Tang Yubao. Tang Yubao immediately swung and punched Ms. Sun in the eye, causing it to swell and turn red. Her tears then flowed continuously. With that, Tang Yubao handcuffed Ms. Gao, took her inside the administration section and beat her and shocked her with the police baton for over one hour, causing Ms. Gao’s backbone to deform. It was during this torture that Li Fengshi, the vice director of the detention center, clamored, "What is the purpose of a detention center?! What is the purpose of having limitless power?! I don’t believe that we cannot tame little Gao Rongrong!"

Ms. Gao, Ms. Sun, and other practitioners were not intimidated by the policemen. Together, they resisted the brainwashing team led by Shi Fengyou from Zhangshi Detention Center. They refused to have pictures taken or write reports, and resisted any other persecution. They kept clarifying the truth to all the detainees and the policemen that they came into contact with.

At the end of April or early May 2004, Longshan Detention Center of Shenyang City started another round of brutal persecution. Even in such a severe environment, practitioners could still obtain Teacher’s new lectures. On May 7, policemen Tang Yubo and Jiang Zhaohua used electric batons to shock five practitioners, including Ms. Gao and Ms. Sun in the morning. And from noon to the evening, they shocked Ms. Gao continuously for about 7 to 8 hours, so that her face became seriously damaged. They also shocked Ms. Sun’s face, mouth, hands, feet and neck. The shocks caused a few lesions to her face, her mouth to swell, and her hands and feet to scorch.

It has been over a year since Ms. Gao Rongrong passed away, but Ms. Sun is still under detention and persecution.

Ms. Gao had treasured the necklace that Ms. Sun gave her; it is full of practitioners’ tears of blood. Later, I was passed this necklace. Every time I see this special necklace gleaming through my tears, I firmly believe that when all the people with kind hearts realize the true nature of the Chinese Communist Party, they will also learn what a wonderful future Falun Gong practitioners, with their persevering faith, are bringing about for humanity and they will understand the practitioners’ great righteous faith.