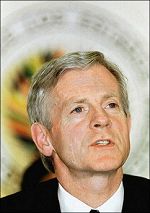 Former Liberal Cabinet Minister David Kilgour speaks during a news conference on the release of a report looking into organ harvesting from prisoners in China on Parliament Hill in Ottawa, July 6, 2006. (REUTERS)

OTTAWA (Reuters) - A respected Canadian human rights lawyer and a former Canadian cabinet member lent their weight on Thursday to charges that China has been killing Falun Gong dissidents so it can use their organs.

The two men -- lawyer David Matas, and David Kilgour, former secretary of state for Asia and the Pacific -- spent two months investigating the accusations, which China has regularly denied.

"It is simply inescapable that this is going on," Kilgour told reporters as he and Matas released their findings.

They provided transcripts of phone calls placed in Chinese to detention centers and organ transplant clinics in which officials said organs from Falun Gong practitioners could be made available for speedy use.

Some of the calls were placed on behalf of the Falun Gong by people inquiring about whether they could get organ transplants. Matas and Kilgour said they had carefully examined phone records and had sat with certified Mandarin translators as they listened to the taped conversations.

They also conducted interviews of their own and investigated government records and other evidence.

"Believe me, I used to be a prosecutor. I knew there would be cynicism and I did my utmost to make sure that everything was satisfactorily and properly and ethically done," Kilgour said.

One call, made on June 8, was to a Mr. Li in the Mishan City Detention Center in Heilongjiang province, according to the transcript.

Kilgour released the transcript of an interview he conducted with a woman who said her former husband, a surgeon, had taken corneas from 2,000 people over two years. She said the victims would first be given an injection that would cause heart failure.

China has banned Falun Gong, a spiritual group, since 1999. It rejects the organ harvesting accusations.

Matas said the practice amounted to a crime against humanity. "Our findings are shocking. To us, this is a form of evil we have yet to see on this planet," he said.

He said that if China rejects the findings it should make sure hospitals keep records of the source of each transplant that would be available for inspection by human rights officials.