(Clearwisdom.net) On the night of July 20, Falun Gong practitioners from Taitung County held a candlelight vigil on the beach in memory of those who were persecuted to death. Practitioners condemned the persecution and called for an end for it. 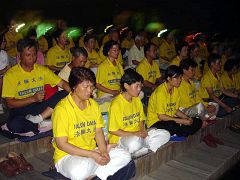 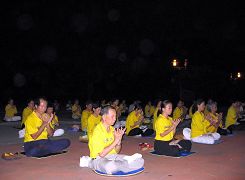 There were many people on the beach. Practitioners clarified the truth to them and told them about the CCP’s harvesting organs from living Falun Gong practitioners. Everybody was shocked by the CCP’s brutality. They signed the names to support efforts to end the persecution. Everybody understands that if we allow the crime to exist, then it will bring human big disasters.

After dark, practitioners lit candles and sang the songs "Falun Dafa is good" and "Coming for you" in memory of those who were tortured to death.

Practitioners voiced greetings to all fellow practitioners in China, appreciating their courage, selflessness and benevolence.

After the organ harvesting was exposed, practitioners realized that the CCP will soon crumble and fall. It is very important to save more Chinese people and create a wonderful future for them before the CCP is disintegrates.

In this peaceful evening, facing the ocean and sky, practitioners called for an end for the brutal persecution with their pure hearts.

“Munich, Germany: Protesting the Persecution of Falun Gong in Front of the Chinese Consulate”

“Frankfurt, Germany: Practitioners Protest the Persecution on July 20th in Front of the Chinese Consulate (Photos)”